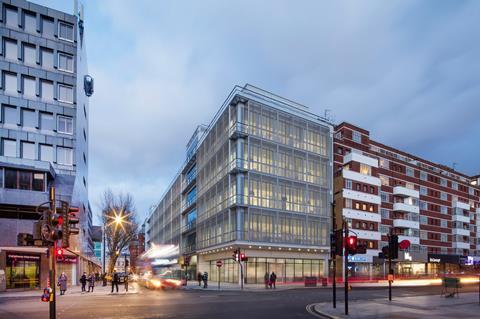 Scott Tallon Walker and Edward Williams Architects’ £380m cancer hospital in central London has finally completed, more than two years after it was supposed to open.

The Bloomsbury project was built by Bouygues UK for University College London Hospitals NHS Foundation Trust, with the contractor winning the then £190m contract in September 2015. The unit was due to open in 2019 but delays meant the finishing date was pushed back into the following summer. The impact of the covid-19 pandemic caused further hold-ups.

The architects were appointed in 2014. When Building Design’s sister title Building first revealed the project was running behind schedule, no reason for the delay was given but a UCLH spokesperson said at the time: “The construction project is exceptionally challenging. For example, we have recently completed one of the largest excavations in London.”

It includes a five-storey, 28m-deep basement – equivalent in volume to the Royal Albert Hall.

The facility will offer proton beam therapy, an advanced type of radiotherapy which can be targeted so precisely that cancer cells can be destroyed without the collateral damage caused by conventional radiotherapy.

It is only the second of its type in the UK, the other being at the Christie Hospital in Manchester. The London facility will be able to treat 650 people with cancer and benign tumours each year, around a third of whom will be children and teenagers. 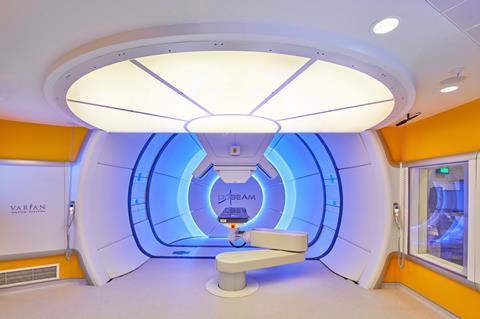 It is situated on the corner of Tottenham Court Road and Grafton Way with the team having to keep access clear for ambulances to get to the main UCLH building over the road on Grafton Way.

The 34,600sq m facility has been built in the Bloomsbury conservation area and is close to two grade II-listed UCL buildings as well as the Northern and Victorian tube lines which serve nearby Warren Street station. It is also directly beneath a protected viewing corridor.

These constraints necessitated a five-storey basement plus mezzanine, with seven floors above ground, reaching a height of 57m. In its entirety the building is the same height as Tower Bridge.

The design is intended to reduce patient stress, with space, direct visual access to natural daylight, natural materials and sensory encounters to offer respite from the traffic-clogged roads just outside. A series of planted terraces is intended to provide peaceful settings for recuperation. 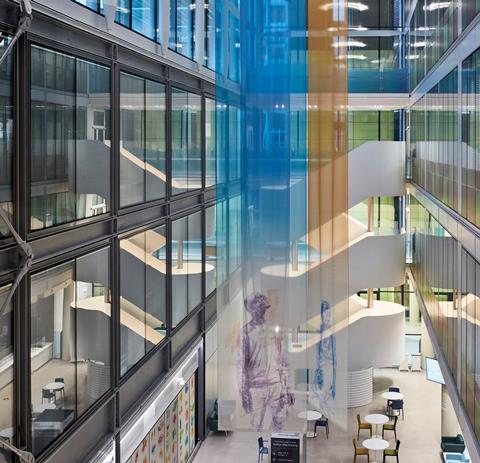 The building is 13 storeys tall

The building, which restores a derelict site to the city grid, is stepped back across its section and split into two corresponding blocks connected by an atrium designed to bring natural daylight right through the building and into all inpatient rooms, something that is particularly important to the hospital’s long-term patients.

To allow a degree of openness to the outside world for the patient, a “veil” has been added to the façade which also provides solar shading.

The architects said they chose the material palette to complement the Portland stone cladding of neighbouring buildings.

Sheila Carney, director of Scott Tallon Walker Architects, said: “The pandemic has further emphasised the importance of excellent healthcare for patients in a modern considered environment designed to benefit the well-being of all users and promote recovery times. The design embraces the principles of direct visual access to natural daylight, nature and landscape and maximises the use of natural materials and colour palettes throughout.”

Edward Williams, founder of Edward Williams Architects and ex-Hopkins partner, said: “From my previous experience designing the Macmillan Cancer centre for UCLH it was clear that site value maximisation would be crucial on this project, in a constrained site with height restrictions from the St Paul’s View Corridor. We managed to arrange most plant and functions that did not require daylight below ground level, as well as healing the urban block and achieving an integrated design with the existing residential accommodation and internal planted roofs.”

>> From the archive: Edward Williams: How leaving Hopkins was the best risk I ever took

Others to work on it include project manager Aecom, civil and structural engineer Campbell Reith and M&E consultant WSP. The client’s advisors included BDP, Arup, Curtins, T&T and Ridge.

At peak, 3,000 people were working on the job with 44,000 cu m of concrete poured to form walls typically two metres thick around the equipment needed for the cancer treatment, with some areas of the concrete around five metres thick.