The RIBA has announced three winners for its ideas competition on how designs might look in areas such as public transport and housing in a post-pandemic world.

Called Rethink 2025, the competition is sponsored by Arup and originally carried a first prize of £5,000.

But given the three-way tie, the RIBA said the total prize pool of £8,000 will now be divided equally with each receiving £2,667.

The judging panel, made up of six design leaders and chaired by RIBA Journal Editor, Hugh Pearman, whittled down the initial 147 entries from 18 countries, to three joint winners in three categories – building, city and street.

>> Learning from lockdown: ‘We cannot responsibly design out human interaction’

The RIBA asked for designs in several areas including healthcare spaces, remote learning, high-density living, public transport, high streets vs online shopping, international travel and the use of technology to monitor and control populations.

The winning entries were Get Everyone In in the building category, Streets are Made for Walking in the streets category and Greater London Agriculture in the city category.

Get Everyone In, Benjamin Holland, Olivia Dolan, Katie Williams 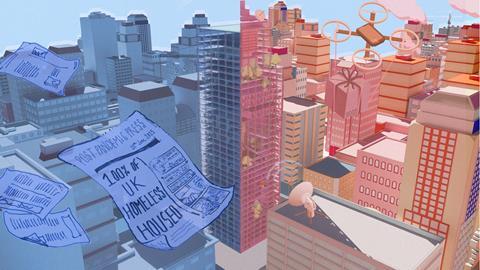 This proposal draws on two issues which have been amplified by the pandemic – the need to house people who are homeless and the prediction that many office spaces will become permanently redundant. Bringing these issues together, it suggests that empty office spaces can be re-used and repurposed to house homeless people.

The proposed reworking of an office tower sees communal health facilities on ground level and brings nature into the space with sky gardens at the mid-level – as well as offering an opportunity for residents to grow their own food in vertical gardens. On the upper floor, drawings show how the deep plan office floor could be used for hostel-style bedrooms around the perimeter with communal spaces in the centre of the floor. There is also a floor left for some office workers.

Streets are Made for Walking, People Matter. 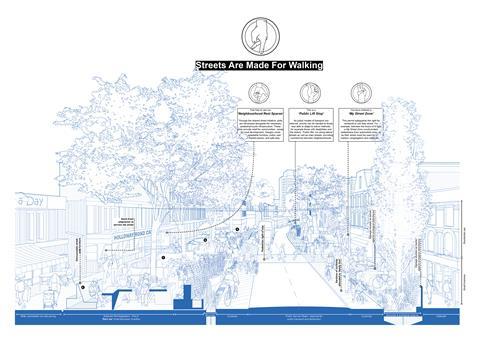 This proposal uses Holloway Road, an arterial road in North London – as an example of what could be done in any city to redesign its streets to make high quality public space for those living either side of such traffic corridors.

In light of changes to how we use streets due to the pandemic - the entry is hopeful for a permanent move towards cleaner, more physically active methods of transport. This proposal offers a two-stage programme for capitalising on these changes, and accelerating a transition towards cleaner, greener, safer and happier streets.

The first stage will be to ensure that the temporary changes to the streets are made permanent by 2025 and that by 2035 these more liveable and breathable neighbourhoods will be linked in a series of lateral rings. The idea is that the radial roads out from the centre diminish in importance as the centre itself does, and the lateral connections increase in importance. With reduced amounts of commuting into the centres of cities now envisaged, this realignment becomes feasible and desirable. 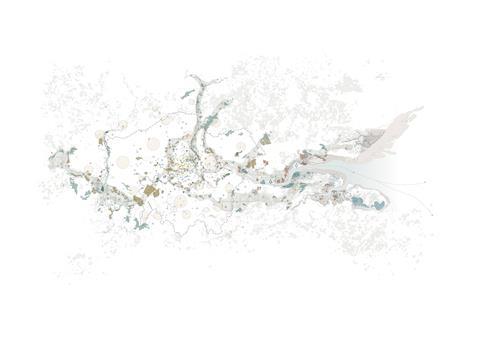 This proposal seeks to transform London’s metropolitan area into an ecologically diverse, agricultural landscape, addressing the premise that industrialised food production has made us vulnerable to diseases transmitted from animals to humans.

The project proposes to introduce agroecology (sustainable farming that works with nature) to London by embedding growing spaces within and around the city, introducing funding for agroecological education that will allow trailblazing farmers to learn the skills necessary to flourish and pass on knowledge.

Initially a patchwork of productive landscapes, over time these growing spaces will become connected by bio-diverse corridors, with wildflowers for pollinators and edible plants for foraging. Along the Thames, a diverse range of activities will become part of this edible landscape, from the wetlands of Rainham Marshes for cattle grazing, orchards producing cider to experimental seaweed farms floating in the estuary.