PDP London’s proposl to refurbish and extend the House of Fraser store on London’s Oxford Street has been given the green light.

The building was designed by the architect Louis Blanc and built between 1934 and 1937. 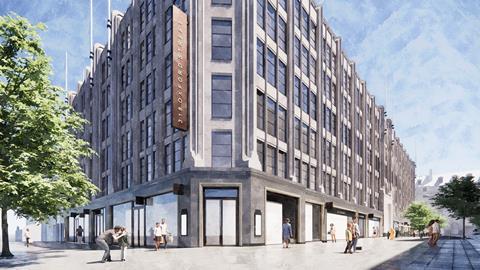 Retail is expected to feature on the ground floor

The retailer still trades from the site, running its operations from the basement through to the third floor.

Publica Properties Establishment wants to turn the remainder of the store into a mixed-use scheme with the existing sixth and seventh floors demolished and replaced with three new floors.

Architect PDP London was given the thumb-up earlier this week by Westminster council with others working on the scheme including project manager and QS Robinson Low Francis, heritage consultant Montagu Evans and structural and façade engineer Civic Engineers.

Floors six and seven will be given over to offices with the eighth housing a 1,000 sq m restaurant.

The building’s art deco style will be retained and the existing Portland stone façade refurbished.

In addition, a new gym is proposed across part of the basement, ground and first floors with a 25m swimming pool in the basement.

House of Fraser collapsed into administration in August 2018 and was bought for £90m by Sports Direct whose boss Mike Ashley reversed an earlier decision to close 31 branches including Oxford Street. He has since said he wants to keep 47 of the 59 stores open.

Earlier this week Squire & Partners submitted planning to demolish a branch of Debenhams in Guildford, while the future of many other former department stores around the country remains uncertain.