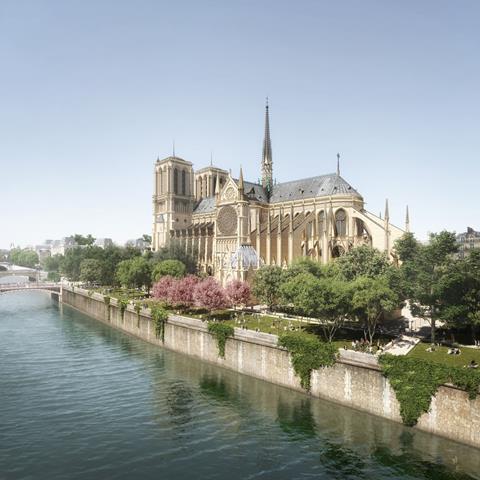 The grounds of the Notre Dame Cathedral in Paris will be reimagined as a clearing in a forest and flanked by a 400m riverside park under new redevelopment plans which aim to encourage more Parisian’s to visit the 800-year-old landmark.

Belgian landscape architect Bas Smets has been named as the winner of an international competition launched in spring last year to complement ongoing repairs to the building, which was ravaged by fire in 2019.

Around 12 million tourists visit Notre Dame each year, but a study carried out prior to the competition found that the cathedral and its constituent spaces, including its crypt, are sometimes little known to Parisians.

Smets, who is leading a team including urban planning agency GRAU and heritage specialist Neufville-Gayet, said he wanted to rethink the “fragmented” elements of the cathedral grounds to create spaces which are more welcoming. 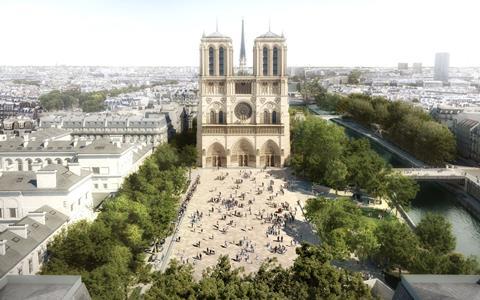 The forecourt will be reimagined as a clearing in a forest

The plans will see the forecourt in front of the building’s main entrance reimagined as a clearing surrounded by trees which will provide shade and seating to queuing visitors.

An underground cooling system will occasionally release a 5mm layer of water across the forecourt surface on hot days, cooling the space and creating “ephemeral reflections”.

A disused underground car park beneath the forecourt will also become a 3,000-sq m “indoor promenade” housing reception areas, toilets, luggage rooms, a new opening onto the Seine and access to the cathedral’s crypts. 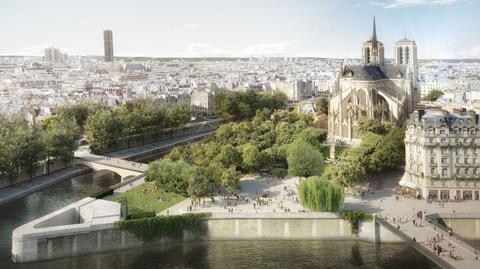 The cathedral’s south side, bordering the Seine, will become a 400m-long lawn sitting alongside the building’s famous flying buttresses and stained glass windows.

The gardens to the east, which are currently divided by hedges and fences, will be opened up and transformed into a broad square. A total of 131 new trees will be planted around the grounds, with vegetation increasing by more than 36%.

Smets said the plans aimed to ensure the site could withstand the changing climate, including more frequent heat waves.

“For 800 years, Notre-Dame has been a privileged witness to the transformation of the city,” he said.

“Rethinking its surroundings means first of all questioning which public spaces for the city of tomorrow.

“The urban figures, such as forecourt, square, square, alignment and banks, are all present around the cathedral, but in a fragmented way.

“The project reveals the quality of each place and rethinks each of these figures from the double angle of the collective and the climate.” 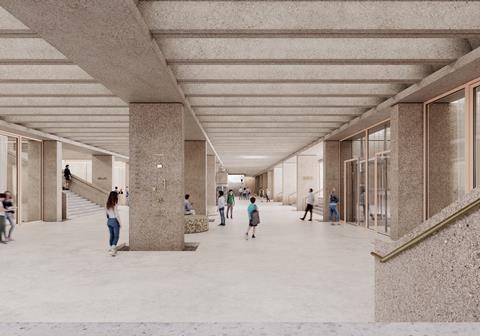 The proposals were given the unanimous backing of a jury chaired by the mayor of Paris and including representatives from the Diocese of Paris and a public body responsible for overseeing the conservation and restoration of the cathedral.

The redevelopment is set to begin in the second half of 2024 and is scheduled to be finished by 2027.

Notre Dame lost most of its timber roof and a 96m spire erected in the 19th century in the April 2019 blaze, which led to an outpouring of emotion across France and saw nearly €1bn raised in private donations for its repair.

French president Emmanuel Macron has vowed the restoration of the cathedral will be complete in time for the 2024 Paris Olympics. 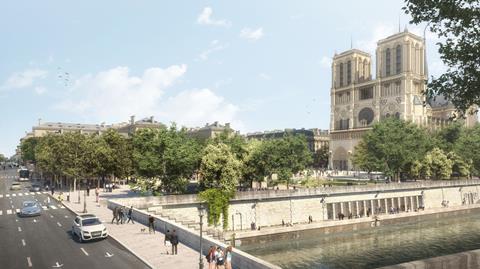