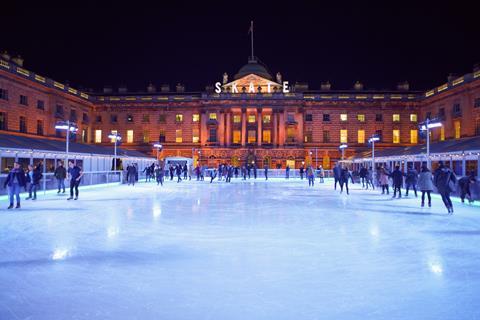 Somerset House courtyard in the winter

Niall McLaughlin has won a competition to design a £50m performance venue for Somerset House.

The practice beat 69 competitors to secure the unanimous approval of the judging panel, which included architect Julia Barfield and musician Brian Eno.

The multi-purpose 700-seat auditorium and public space will be built in the gap between the grade I-listed building’s 1788 west wing and 1856 “new” wing.

The panel said the winning design gave “a strong sense of design direction and clarity of thought, with an unmatched commitment to sustainability and distinctly creative and collaborative approach”.

A Somerset House spokesman added: “The jury felt confident that in their hands, the team would deliver Somerset House’s vision of creating a world-class performance space to make and showcase new, cutting-edge multi-disciplinary work to new, younger and more diverse audiences.”

Construction of the practice’s Pepys library for Magdalene College in Cambridge is currently underway, while its 29m tall Auckland tower in Durham opened in 2018. Its 2014 proposal for a new entrance and outdoor gallery for the Natural History Museum was never realised.