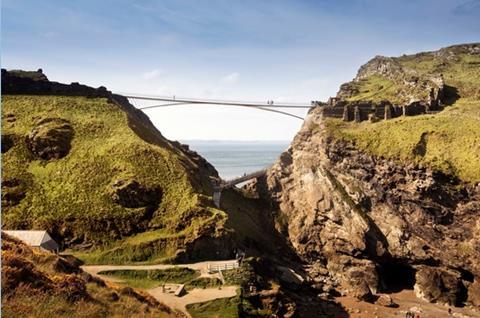 The scheme will link the mainland with Tintagel Castle island

English Heritage is insisting its £5m Tintagel footbridge scheme will be ready later this summer despite busting this month’s opening deadline.

The Cornish bridge, which was designed by Shard architect William Matthews Associates and Belgian civil engineering firm Ney & Partners, was due to have opened this month - already a postponement of the original May opening date.

But the scheme has been hit by delays with Georgia Butters, English Heritage head of historic properties Cornwall, telling BD: "The new footbridge at Tintagel Castle is a complex feat of engineering with multiple components requiring individual, specialist fabrication and this process takes time.”

The press view was recently delayed for the second time. Originally due to be held on January 22, when the opening was planned for May, the visit was rescheduled from this week to an unspecified future date.

In January a press spokesman told BD: "The opening of Tintagel Castle’s new footbridge was anticipated for May 2019. However it has been necessary to extend the bridge’s build time to allow for the fabrication of some of the bridge’s more specialist components – that therefore means that the bridge will now open at a later date."

The 70m-span bridge links the mainland with Tintagel Castle island and is being built by American Bridge UK with fabrication being carried out by Plymouth firm Underhill Engineering.

Work to lift the first of the dozen steel sections that make up the bridge into place began this week and Butters added: “We will quickly see the bridge take shape and will announce our summer opening date soon."

The bridge is being bankrolled by Tetra Pak packaging heir Hans Rausing, whose fortune was put at £9.6bn in the latest Sunday Times Rich List.