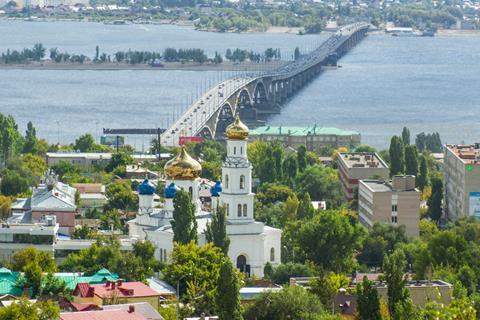 Mae has been longlisted in a masterplanning competition addressing several sites in a historic Russian city.

The UK architect, best known for its housing work, is in one of five international teams that are fighting it out in the second round. It is part of a Russian-led team. Other practices in the running include Belgium’s Office Kersten Geers David Van Severen. Each longlisted team was awarded an honorarium of £50,000.

The contest is after architectural and urban planning concepts for the development of the centre of Saratov which sits beside the Volga 800km south-east of Moscow. A key trading port in the 18th century, it expanded rapidly in the 19th and is now a sprawling industrial city with a rather dislocated historic core. It has one of Europe’s longest bridges at 2.8km, built in the 1960s.

The contest involves five large masterplanning sites, with each team expected to come up with proposals for them all. Mae’s task within its team was to focus on ideas for a former airport, Saratov-Central, which has been ear-marked for a new residential district.

Teams had to include architects, landscape architects and urban planners. Mae’s team is led by Novaya Zemlya, an urban data analysis and masterplanning firm that Mae collaborated with last year on a project near the Caspian Sea. Mae director Alex Ely said the practice was beginning to build a profile in Russia and that they were delighted to have got this far. He said the airport was an interesting site to be working on.

The jury, led by Nikolai Ivanovich Shumakov, president of the Union of Architects of Russia, will meet this week to whittle the longlist down to two teams. A winner will be announced later this month.