Hudson gets a ‘pass’ with Norwich uni complex 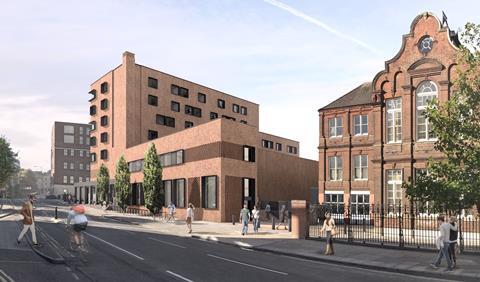 Hudson Architects has won planning permission for a new academic and residential building for Norwich University of the Arts.

Its seven-storey city-centre scheme for the university, the former Norwich School of Art and Design, features a large lecture theatre and public event space at its lower levels, with 100 en-suite student rooms above.

The proposals – which are earmarked for the city-centre site of disused 1970s student housing and a car park – also include new public space alongside the River Wensum.

Hudson is one of five practices with a base in Norwich that works with NUA’s architecture students. The others are Feilden & Mawson, Purcell, LSI Architects and Hamson Barron Smith. 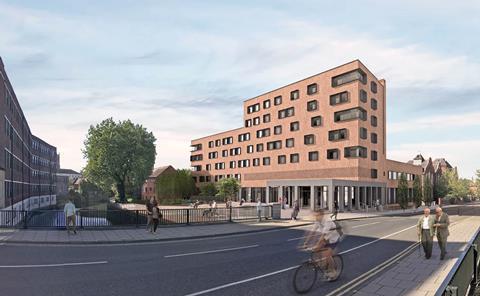 Hudson Architects’ new building for Norwich University of the Arts, seen from the Duke Street bridge

Hudson has previously handled the refurbishment of NUA’s 19th-century Boardman House lecture hall, which houses the university’s architecture department, and the remodelling of its Cavendish House building to provide a gallery and incubator space for start-up businesses.

But the 44,500sq m new development on Duke Street will be NUA’s first purpose-built scheme under its current name, the practice said.

“A metal-clad plinth at ground floor level contains distinctive etched patterns that recreate those used at an ironworks that stood on the site in the 19th century, and celebrate the importance of artistry and craftsmanship at NUA,” he said 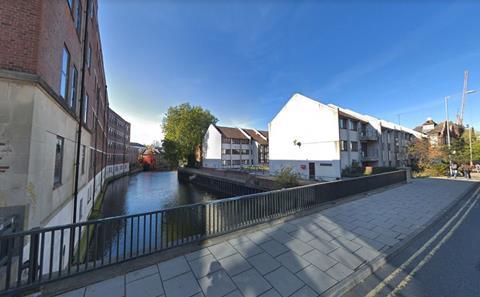 “Above this, the building uses red brick in reference to the site’s industrial heritage, rising to seven storeys where it faces Duke Street and stepping down to five storeys in response to adjacent residential buildings.

The project is expected to start on site this winter for completion in summer 2021.