Gateshead Quays by HOK and AHR

Plans drawn up by HOK and AHR for a £260m conference and events centre are set to go in for planning early next year.

The 80,000sq ft development will be built on Gateshead’s quayside and will include a 12,500-capacity arena and a conference and exhibition centre.

HOK is designing the masterplan for the new arena, conference and exhibition centre, while AHR Architects is behind a hotel that makes up part of the scheme.

A full planning application is expected to be submitted early next year, with a target opening date of 2023.

The development will sit directly in front of the city’s Millennium Bridge and between Fosters’ Sage Gateshead building and the Baltic Centre for Contemporary Art.

Sir Robert McAlpine has been appointed to build the project, which is being developed by Gateshead Council in partnership with Ask Real Estate and real estate investor Patrizia. 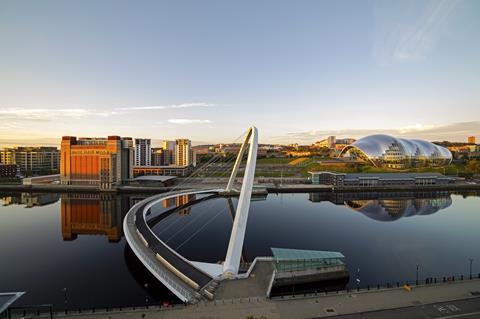