Glenn Howells Architects has been given the green light by Birmingham planners for a 49-storey residential tower at Argent’s Paradise scheme in the city.

The 155m tall building is called Octagon because of its shape and will be one of the tallest in a glut of towers planned for the city. 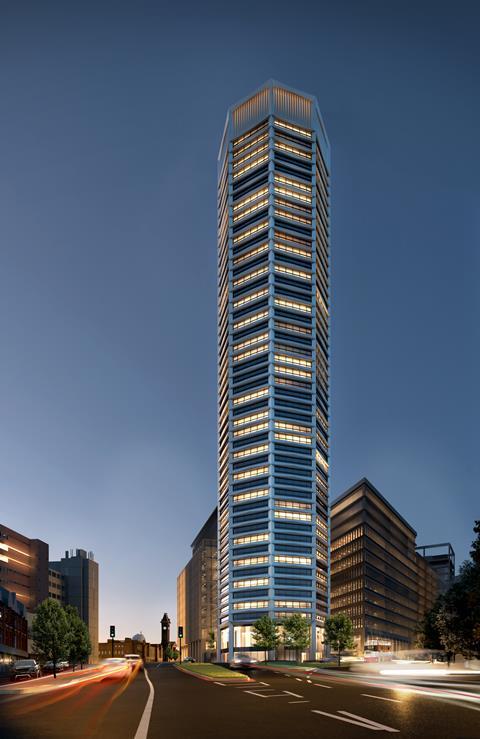 The scheme has earned its Octagon name because of its shape

The tallest will be a 61-storey block at 100 Broad Street by another local firm Glancy Nicholls, which is also behind a 51-storey scheme at One Eastside.

Octagon will feature 370 build-to-rent homes across a mix of one, two and three bedrooms and once built will be one of a number to eclipse the current tallest residential scheme in the city, the 33-storey Bank development that was built by Wates.

The first two buildings of the £700m Paradise development were both office schemes and completed by Bam while Sir Robert McAlpine is working on the next commercial phase of the scheme called One Centenary Way, also designed by Glenn Howells.

Bam, which is also building a 26-storey block elsewhere in the city called 103 Colmore Row, was drafted on to Eric Parry’s One Chamberlain Square office scheme after original contractor Carillion went bust at the beginning of 2018.

The building is the new home of accountancy firm PwC with the business having moved around 2,000 of its staff from across the city into the complex just before the covid-19 pandemic struck last year.

A planning application for Feilden Clegg Bradley Studios’ Three Chamberlain Square, a 160,000 sq ft office next to the Town Hall, is due to be submitted to city planners later this year.

In all, Argent plans on building 10 buildings across the 2 million sq ft plot which will also include offices, shops, bars, cafés, restaurants and a hotel.

Meanwhile, Glenn Howells has also been given the OK for a student accommodation scheme on Birmingham’s Dogpool Lane.

The £24m red brick terracotta scheme is due to be completed for the 2023 student intake and is being developed by student developer specialist Alummo. It will be home to close to 170 students.

Glenn Howells Architects partner Dav Bansal said: ”Both of these projects have been on a very different journey but are the result of close collaboration between the design team, client, consultants, the local communities and the city council.

”Having two new projects in Birmingham is a great honour for us and we are proud to be shaping the future of one of the finest cities in the UK.”