A former minister responsible for building regulations has denied that the housing department prioritised deregulation over life safety in the years leading up to the Grenfell Tower fire.

James Wharton told Thursday’s hearing of the inquiry into the 2017 blaze which claimed 72 lives that his “understanding was that the system was fit for purpose and the building regulations were working well”.

In 2013, the department launched a review of the regulations in response to an inquest into the 2009 Lakanal House fire in south London.

Six people, including three children, died in the Camberwell block when flames rapidly spread across the building’s combustible and non-compliant cladding.

But the review, which was initially focused on approved document B, the part of the regulations dealing with fire safety, was delayed after officials expanded it to include all of the building regulations. 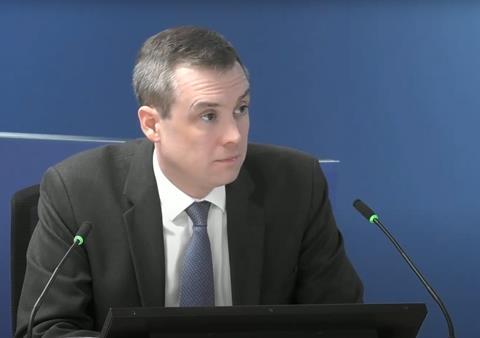 The inquiry has previously heard this was partly because of a requirement imposed by ministers to remove more regulations than were added, meaning that the entire set of regulations needed to be included in the review to avoid removing too much from just one part.

By 2017, almost no progress had been made on the review despite nearly eight years having passed since the fire which had prompted it.

A presentation to Wharton in 2015 outlining the “key drivers” of the review put “deregulation and simplification” at the top of the list.

This was followed by “supporting government priorities [such as] energy efficiency”, ensuring the guidance reflected the latest technologies, responding to new issues such as climate change and implementation of European legislation.

Fire safety was not mentioned until page eight, under the heading “ensuring bad things don’t happen”. A picture of Lakanal House under this heading was the only mention of the blaze in the presentation.

Counsel to the inquiry Richard Millett QC asked: “Are you able to explain now why it is that your officials did not put anything about Lakanal House, the causes of the fire , the fact that six people had died, the fact that there had been an inquest… in this pack?”

The hearing was shown an email sent by official Andrew Newton to the department’s special advisors in March 2016 describing a set of research documents on the review which required ministerial sign-off as “very much non-urgent and far from being a priority”.

Wharton said he did not recall ever seeing this email and could not explain why Newton had described the research documents in that way.

The former minister was also questioned about a 2015 meeting he attended with the All-Party Parliamentary Group (APPG) on Fire Safety and Rescue, which was at the time chaired by the late David Amess MP, who was killed last October.

The APPG had been calling for tighter restrictions on the use of combustible building materials for several years, with Amess having written to the department many times warning of the risks to life safety posed by the regulations.

The hearing was shown minutes from the meeting which said that Amess had “flagged that [the APPG] had not been able to persuade previous ministers that a review of Approved Document B was urgent”.

The minutes recorded that Wharton “welcomed comments from the all-party group and the federation. However, he was clear that the principal objective for any work would be simplification and the reduction of red tape.”

“Have you any reason, sitting there now, to think that that was a mis-recording of what you said?” Millett asked.

“I don’t think this note captures in total what was said,” Wharton replied. “I don’t dispute it’s quite possible that I said simplification and reduction of red tape would be part of the aim of what we’re going to do. I don’t recall having said it was the principal objective of work.”

The highly combustible ACM cladding fitted to Grenfell Tower during the building’s ill-fated refurbishment was given final building control sign-off in 2014, five years after the Lakanal House fire.

The review was still incomplete by the time of the Grenfell fire, and ACM was not explicitly banned by the government until December 2018.

Wharton said in his witness statement to the inquiry: “Everything happens slowly in the civil service and the likelihood is that nothing I could have done would have speeded the review up.”