Claims made by government officials that a drive for deregulation restricted efforts to toughen up fire safety guidance are “ludicrous”, former housing secretary Eric Pickles has told the Grenfell Inquiry.

Several former officials at the Department for Communities and Local Government have told the inquiry in recent weeks that a policy of cutting red tape introduced under David Cameron had made it harder to amend building regulations in the years leading up to the Grenfell Tower fire.

Pickles, who was in charge of the department between 2010 and 2015, said he did not find the evidence given to the inquiry by his officials “very convincing”.

In 2013, officials had been tasked with carrying out a review of fire safety guidance following the Lakanal House fire, which killed six people in 2009 when flames spread rapidly across the building’s combustible cladding. 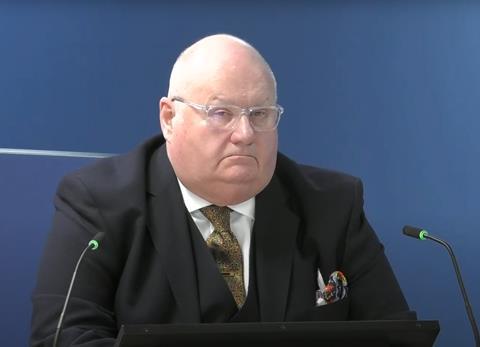 Coroner Frances Kirkham, who led an inquest into the fire, had asked the department to amend the guidance to clarify the risks of flame spread across external walls.

But this review was repeatedly expanded, first to include all 300 pages of the fire safety guidance and then to include a wider review of building regulations as a whole.

Officials have told the inquiry that this was done partly because of a “one in, one out” policy introduced in 2011 where new regulations could only be added if existing ones were removed.

This “red tape challenge” policy, which was strengthened to “one in, two out” in 2013 and “one in, three out” in 2016, was intended to stimulate the economy in the wake of the financial crisis.

Yesterday, counsel to the inquiry Richard Millett QC asked Pickles: “Did you know that officials within the building regulations division were operating under an assumption that the deregulation policy - whether it’s one in, one out, one in, two out or the Red Tape Challenge - would also catch even a clarifying amendment to the statutory guidance in support of the Building Regulations?”

Pickles replied: “No, I didn’t, and I would have regarded it as being ludicrous and wholly disproportionate.”

Former deputy director of building regulations Bob Ledsome told the inquiry last month that neither he nor any of his colleagues at the department had ever applied for an exemption for the building regulations from the deregulation policy because he did not think it was a “fight worth having”.

Pickles, who was shown this evidence at yesterday’s hearing, said his reaction to it was “intense impatience”.

He added: “My view might be put simply: it was politicians’ role to take decisions. You don’t help the politician to take a decision unless you confront them with the reality.”

Ledsome had said he had not thought about asking for an exemption because Pickles would have had to make the case to then-business secretary Vince Cable, who was responsible for decisions on regulating industry.

Pickles admitted that there would have been an “enormous amount of horse-trading” but that he would still have expected officials to flag any issues with the building regulations review.

“I’m not saying I would have agreed with Mr Ledsome. But I think I’m entitled to have had a chance to do the right thing or do the stupid thing,” Pickles said.

But Pickles admitted that he was in favour of deregulation at the time because adding new regulations was a “difficult thing to achieve”.

Millett asked if he was “one of those ministers… who was trying to drive change through a deregulatory agenda and, therefore, acting as a disincentive to any change to the building regulations and guidance that officials wanted to make?”

“Of course I wanted to deregulate,” Pickles replied.

“Were you aware that officials felt… that they were working in a policy environment where regulatory intervention was a last resort?” Millett asked.

“Well, that isn’t a bad thing, is it?” Pickles said, adding: “To have a system where… we’re not going to jump straight into regulation, that strikes me as being a good thing.”

Yesterday’s hearing was also shown comments sent to ministers by Brian Martin, the official responsible for building regulations, in which Martin cast doubt on the recommendations made by Kirkham in response to the Lakanal House fire.

Martin said the expert witness who had advised Kirkham’s inquest had given “confused and conflicted” evidence on the building regulations, and so it was “unsurprising” that the coroner had asked for the regulations to be clarified.

“That certainly affected my judgement in terms of the importance of doing [the review],” Pickles said. “I wasn’t going to dismiss the coroner’s views. But, nevertheless, it was very much at the forefront of the mind. I mean, it was said that I shouldn’t worry, there wasn’t any real issue in terms of safety, people know these kinds of things.”

Almost no progress on the review had been made by the time of the Grenfell Tower fire, which killed 72 people in June 2017.

Decisions to specify combustible cladding on the walls of the building during its flawed refurbishment were made in autumn 2014, more than five years after the Lakanal House fire.

The building regulations were not amended to explicitly ban the use of combustible materials until December 2018, a year and a half after the Grenfell fire.