The government had a “completely false picture” of how fire safety regulations were working in the months leading up to the Grenfell Tower fire, former housing minister Gavin Barwell has said.

Barwell told Tuesday’s hearing of the Grenfell inquiry that he was under the impression that fire safety policy was working because fatalities from fires were decreasing.

Officials had introduced Barwell to the building regulations in July 2016, the same month he was appointed as housing minister.

Briefing notes of the meeting shown to the inquiry described how the number of deaths from fires had more than halved in the preceding 30 years, which Barwell said he had been “comforted” by.

He said the meeting gave him a “completely false situational awareness”. 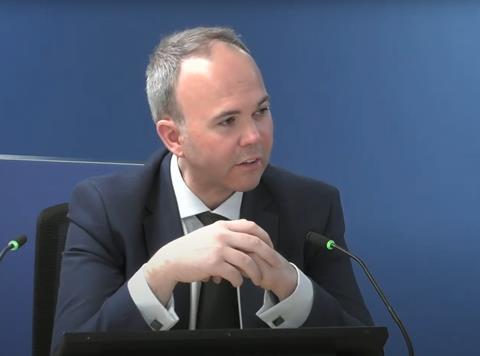 Part of Barwell’s role was to oversee a long-delayed review of the building regulations prompted by the 2009 Lakanal House fire, which was at that time the UK’s worst ever tower block fire.

But he said he did not believe there had been any mention in the meeting of the blaze, and no mention of a discussion document required to progress the review.

The fire, in Camberwell, London, had killed six people including three children after flames had rapidly spread across the 14-storey building’s combustible cladding panels.

Coroner Frances Kirkham, who carried out an inquest into the fire, issued recommendations to the government in 2013 for building regulations to be amended to clarify the risk of fire spread across external walls.

But almost no progress on the review had been made by the time of the Grenfell tower fire which killed 72 people in June 2017.

Officials at the housing department have told the inquiry the delay was partly caused by pressure within government to focus on deregulation rather than adding new regulations.

Barwell said he had been in favour of deregulation but said there had been a “change of tone” under then prime minister Theresa May compared with her predecessor David Cameron, who had “driven hard” on deregulatory policies.

He added that he would have been “very willing” to make the case for building regulations being exempted from deregulation if officials had asked for it, but that this had never happened.

But he said there was a “clear presumption” that the review into building regulations was not “life safety critical” because it had been wrapped into a much wider, longer-term review which would take years to complete.

Research documents for the review which had been delivered to the department in March 2015 had not been published until February 2019, a delay which Barwell called “absurd”.

He said: “It is clearly appalling that public money has been spent on pieces of research that has sat in the department for four years without being published. I have no explanation as to how that’s happened and I’m appalled by it.”

Despite repeated warnings from the All Party Parliamentary Group (APPG) on Fire Safety, the changes to building regulations recommended by Kirkham had still not been made by spring 2017.

Barwell had declined a meeting with the APPG, which was chaired by the late MP David Amess, in October 2016, something Barwell said he “deeply regrets”.

He said he had later agreed to a meeting in March 2017, against the advice of his officials.

But this meeting never happened because of the 2017 snap election, which resulted in Barwell losing his seat.

The inquiry has already heard that the APPG had sent a series of lengthy letters to housing ministers over several years calling for fire safety regulations to be made tougher, but had become increasingly frustrated by a lack of action in the department.

Yesterday’s hearing was also shown a letter sent to the department by the London FIre Brigade (LFB) in April 2017, two months before the Grenfell fire, warning that the brigade was “deeply concerned” about fire safety issues in blocks of flats and other buildings including schools.

In the letter, then commissioner Dany Cotton said the LFB had discovered at least one property each month since the beginning of the year with “significant” fire safety issues, and that it is “safe to assume that there are many other cases that do not come to our attention, yet are placing the residents of those properties in significant risk”.

Cotton also said the LFB was “concerned about contractor competency” and asked to discuss wider issues in relation to the quality of housing.

Barwell, who was campaigning at the time for the election, never received the letter.

He said yesterday: “of the material that was provided to me to study before this appearance today, I found this the most distressing letter.”

He added: “Whatever the official advice had been, if the commissioner of the London Fire Brigade writes in these terms, listing multiple problems with the system, I would’ve taken the meeting as a matter of urgency.

”I would’ve assumed that these problems were not unique to London but, if they were being seen across London boroughs, were probably a fundamental problem with the system nationwide.”

Asked to explain how the letter never came to his attention, he said: “Because the election had been called and I was in the constituency, and the private office was only referring the most urgent correspondence to me, and they obviously decided this was a meeting that could be taken immediately after the election.”

After losing his seat, Barwell was made a Lord and was later appointed as Theresa May’s chief of staff.