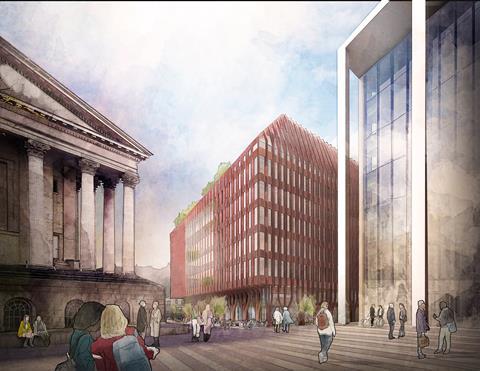 Feilden Clegg Bradley Studios has won the competition to design the next building at Paradise Birmingham.

The practice beat Birmingham’s Associated Architects, Shedkm and Reiach and Hall in an invited competition run by developer Argent for the office building known as Three Chamberlain Square.

It will sit in a prominent location in the £700m Paradise masterplan, to the west of the town hall and fronting on to Paradise Street.

It will become the fifth building to be built as part of the project, with a planning application expected to be lodged next year.

Rob Groves, Argent’s regional director, praised FCBStudios for its “outside-inside” design which he said would be highly sustainable.

“This made the design stand out in what was a very high-quality field,” he said. “They have also designed a building that has a compelling architectural story behind it and makes a powerful statement in its own right as well as fitting in perfectly to a larger scheme and masterplan.

“The fact that FCBStudios also designed the new Royal Birmingham Conservatoire at Eastside, which formerly sat on the site of Three Chamberlain Square, also means the completion of a historic design circle in relation to this particular part of the Paradise site.”

Keith Bradley, senior partner at the architect, said it was one of the first post-covid office buildings to be commissioned in the UK and that they intended to bring a “game-changing office building to the West Midlands”.

“Our ambition is to make a working environment which is desirable and attractive, while pushing the sustainability aspirations to deliver a net zero carbon building,” he said.

The announcement follows the submission last month of a planning application for what the developer is calling “the world’s first pure octagonal residential tower”, the 49-storey Octagon designed by Glenn Howells Architects.

Paradise’s first two office blocks are at the point of completion. Eric Parry Architects designed One Chamberlain Square for PwC, while Two Chamberlain Square was designed by Howells which is also behind a third scheme at the site, One Centenary Way, which is being developed on the site of the old Adrian Boult Hall conservatoire.

Paraside – which involved the demolition of John Madin’s brutalist ziggurat library – is a private-public joint venture with Birmingham council. The private sector funding is being managed by the international business of Federated Hermes while Argent is development manager.