Office is the practice’s first base outside of London 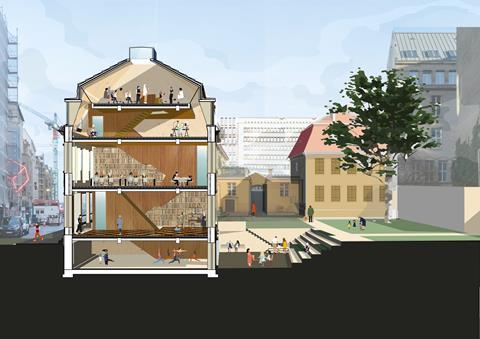 dRMM has opened a new studio in Berlin out of “Brexit depression”, a director at the practice has told Building Design.

Jonas Lencer said the office was set up to make it easier to bid for jobs on the continent and hire EU-based staff.

The new studio, dRMM’s first outside of London, is intended to act as a base for the practice’s projects across the EU and currently employs two staff - one British-born architect who has relocated to the city and one architect recruited in Germany.

It was officially registered in spring last year but the practice only made it public last week. Lencer said it is not being seen as a “subsidiary”, but a separate entity which will “live and breath the dRMM ethos but develop its own identity”.

Asked why the studio had been established, he said: “I think it’s mainly because of our Brexit depression.

“We’ve always debated about how to do more international work and until Brexit really filtered through we always felt Europe is easy to do from London, and we’ve been part of the debate and done a few projects abroad but after Brexit we realised that we don’t really have access to the market anymore.

“But also we didn’t really have access to European talent any more which is a bit sad.”

He said that staff at the practice, which often continues working on projects through construction, did not want to have to send designs over to Europe for local architects to implement.

“A lot of the design work is in those later stages, and we wanted to do that in Europe as well so we know that we need a base to work with local contractors, local consultants and regulations.”

He added that Berlin was chosen partly because it is a “really exciting city” and partly because both he and another director at the practice, Judith Stichtenoth, had studied there.

When London staff were asked who would like to relocate to Berlin, Lancer said about 10% had volunteered.

dRMM is already working on one project in the city, a rebuilding of a baroque 18th-century building in Berlin destroyed during the Second World War.

Known as the Neue Schleiermacherhaus, it is expected to be submitted for planning in around two months.

Lencer said the Berlin studio will also be bidding for a lot of school regeneration projects in Germany.

>> From the archive: What the Brexit deal means for architects

Having an office in the EU will also make bidding projects across Europe simpler. It is a move already instituted by a number of practices post-Brexit, including RSHP which opened an office in Paris and Hawkins Brown which has opened a studio in Dublin.

dRMM is understood to be designing a 90-room hotel on the coast of Portugal which includes medical and wellbeing facilities.

Making use of timber and rammed earth, the low-rise scheme has been designed to minimise its impact on the landscape.