The scheme will see the creation of two theatres, two hotels, a four-screen cinema, a rooftop park and other restaurant space 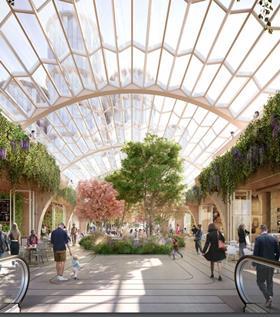 A proposed £1bn redevelopment of the Olympia centre in west London has been approved by the local council.

The 186,000m2 scheme, designed by Heatherwick Studio and SPPARC, will see the creation of two theatres, two hotels, a four-screen cinema, a rooftop park and other restaurant space.

Four original exhibition spaces, dating from 1886, will also be modernised under the plans.

The project was voted through by four votes to two at a planning meeting of Hammersmith and Fulham council on Wednesday night (30 January).

The scheme is being brought forward by a consortium of investors, led by the owners of Olympia: Yoo Capital and Deutsche Finance.

The JV has yet to decide on a type of construction contract – with a decision set to be made on who will build the scheme by the third quarter of 2019.

Enabling works will start this year, with main construction work starting in the first quarter of 2020.

The consortium has already appointed Gardiner & Theobald as quantity surveyor, Desco as M&E consultant and Pell Frischmann as structural engineer.