The revamp the of tower containing Big Ben has gone up by another £9m with the scheme now officially due to be completed by next summer.

The £79.7m restoration of the grade I-listed Elizabeth Tower, which was designed by Purcell, was due to be finished later this year but the covid-19 pandemic has pushed the finishing date into the second quarter of next year, with the cost of dealing with covid sending the final bill up by 11% to close to £89m. 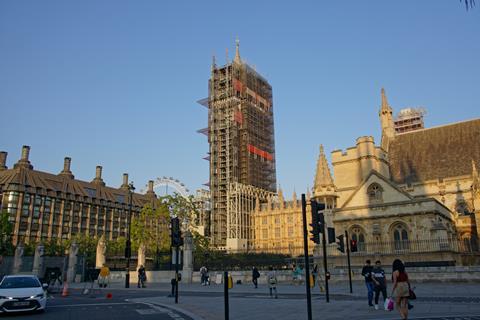 Work on the tower is due to be finished next summer

In a statement, the House of Commons said: “Additional costs now incurred relate solely to the impact of covid-19, which, like almost all construction projects across the country, has affected the progress of work.”

The Sir Robert McAlpine job was shut for four months because of the pandemic while the introduction of covid-secure measures at the site meant productivity was at a reduced rate until November last year.

The statement added: “This [£9m] figure has now been scrutinised by independent consultants, who are confident in the projections that have been developed.

“Parliament’s teams have mitigated against the financial impact of coronavirus, working collaboratively and positively with contractors to reduce the impact to the taxpayer, and ensuring that costs paid by Parliament are proportionate to its contractual obligations.

“The project’s teams continue to meet the challenges posed by this complex conservation and enjoy the support of the leadership of both Houses in their delivery and approach.”

Work on the tower started in 2017 with the clock and striking mechanism being disconnected in August that year.

But the pandemic meant work on all sites within the parliamentary estate stopped on 25 March last year, two days after the first lockdown was imposed, to implement social distancing measures.

In an update this afternoon detailing the timetable of the remaining work, the House of Commons said work to install the clock mechanism will begin this summer with more scaffolding removed this autumn.

Early in 2022, the bells – including Big Ben itself – will be reconnected to the original Victorian clock mechanism. Removing the gantry, which has protected the scaffolding structure, will be one of the last jobs to complete, before the site is cleared ahead of its reopening next summer.

In 2017, it was revealed that total costs on the project had more than doubled to £61m from £29m. Reasons given included the need for more and complex work on the tower and clock, as well as further ground works to support the weight of the scaffolding. Contingency funding and fire safety costs took the figure up again to its current £79.7m figure.

Other work on the tower, which was designed by Charles Barry and Augustus Welby Pugin in 1843, includes repairing and redecorating the interior, renewing the building services and making improvements to health and safety and fire protection systems.