Consented RSHP hotel being redesigned as student flats because of covid 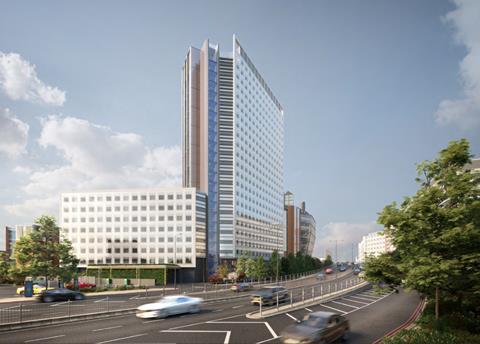 One of two hotels designed by RSHP for a site beside the main road out of London to Heathrow Airport is being redesigned as student flats because of the hit tourism has taken during the pandemic.

Developer Dominvs said the larger 23-storey hotel was not currently viable. It confirmed that it is about to start work on another part of the consented scheme, a five- to 10-storey Premier Inn hotel.

Both were designed by Rogers Stirk Harbour & Partners and won planning in December after a previous proposal by Dexter Moren proved so unpopular that it was withdrawn on the eve of the planning committee.

Dominvs told a public consultation that it is aiming to submit a revised planning application next month which will reduce the height of the tower by about 8m. Reconfiguring it to contain student flats necessitates a slight enlargement of the plan, said director Jay Ahluwalia. 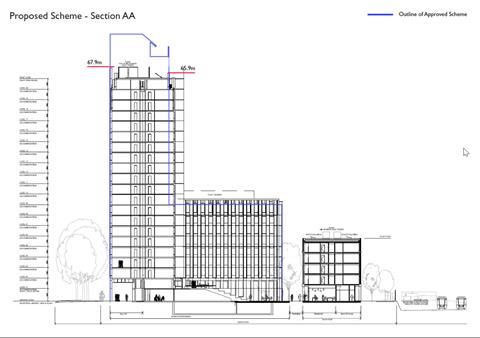 The new proposal - comparing its height with the consented RSHP scheme

He said they were working with a specialist student layout architect on the rejig and were still at the design development stage.

“There is a wider dialogue between us and Rogers about how we deliver the scheme as a whole,” he said. “Rogers designed the south building and the intention is to continue to work with them across the project.”

As a sop to residents who objected to its “looming” height, they will reduce the height from 76.1m to 67.9m and remove the rooftop bar. 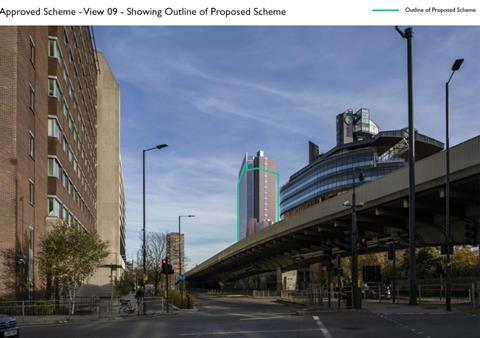 The new proposal as a green line on the consented scheme

There would be a “modest” 600sq m increase in floorspace which would allow them to create approximately 696 student rooms in a 60:40 ratio of studios and rooms with shared facilities. The hotel would have contained 442 rooms and been operated by Dominvs.

The new building will be run by international student accommodation operator Scape, which has worked with Richard Rogers’ son Ab Rogers in Australia.

Ahluwalia said if the new application was unsuccessful Dominvs could wait a couple of years until hotels were “fundable” again and build the consented tower – or sell that part of the site to another developer who could choose to build it.

He said they had considered but ruled out an office use for part of the site which is beside the A4 in Hammersmith. 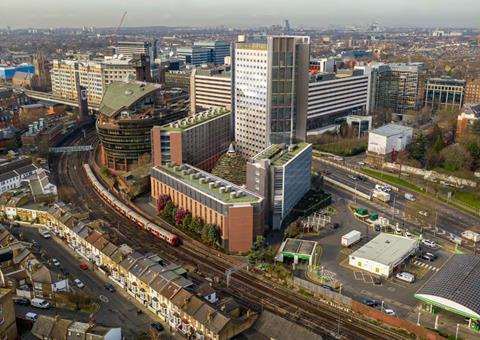 Aerial view from the south of the consented scheme. The building in the foreground is set to be built out as a Premier Inn this year

“We are really committed to the hospitality business as a family and company but we are trying to bring the whole scheme forward with a use that’s more fundable,” he said. “In the current climate the pandemic poses quite a challenge to the hotels business. We think this will make it deliverable… the student market is still very fundable.”

The south building will be built as per the planning consent, he said. Demolition by McAleer & Rushe of the old magistrates court on the site is nearing completion.

Construction work is due to start in about three months and is expected to take between 24 and 30 months depending on the results of ground surveys. 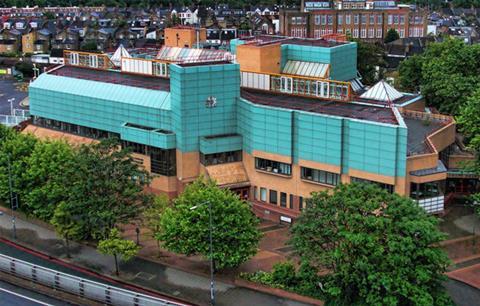 Hammersmith Magistrates Court, which is set for the bulldozer, viewed from the A4