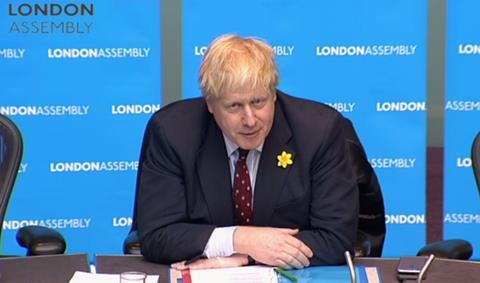 A RIBA Council member has asked the institute to investigate whether Boris Johnson should be stripped of his honorary fellowship.

The move, by student member Simeon Shtebunaev, comes as the RIBA approved a new code of conduct which comes into force at the start of next month.

It is described as, among other things, a “tool for holding members to account in the event of a complaint against them”.

Others cover everything from conflicts of interest to professional competence via building performance and the environment.

Johnson was upbraided by the House of Commons standards committee this week for failing to declare his share in a property in Somerset for a year – and for telling the commissioner that his register of interests was up to date. 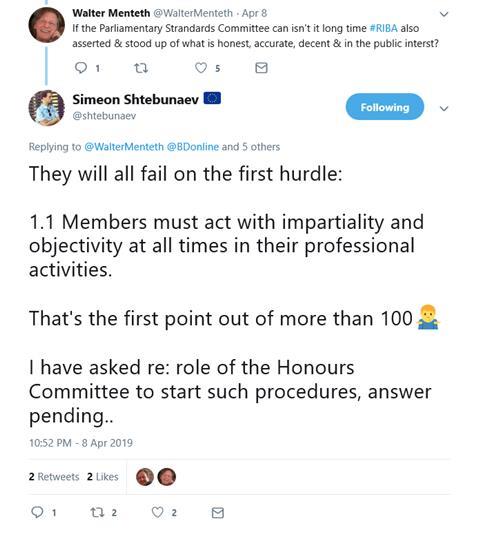 In its ruling the committee said: “The committee noted with concern that two investigations by the commissioner in rapid succession demonstrate a pattern of behaviour by Mr Johnson which reinforces their previous view that he had displayed an over-casual attitude towards obeying the rules of the house.”

Last summer he got into hot water for not asking permission from the Advisory Committee on Business Appointments before starting a weekly column in the Daily Telegraph.

He has also been accused of putting his own interests before the nation’s in multiple areas ranging from Brexit to the Garden Bridge. Yesterday the Charity Commission slated the Garden Bridge Trust as a “failure for charity”.

Shtebunaev, a RIBA national Council member and student rights campaigner, said he had asked the honours committee to start procedures to strip people deemed unsuitable, such as the former foreign secretary, of the lifetime award which allows recipients to use the letters Hon FRIBA after their name.

It was bestowed on Johnson in 2011 when he was mayor of London by a committee chaired by then-president Angela Brady and including architects David Adjaye, Yvonne Farrell, Niall McLaughlin and Sarah Wigglesworth, and Terence Conran.

This week RIBA president Ben Derbyshire tweeted that the RIBA was publishing “new Codes of Conduct & Practice with higher standards relating to: Equality, Diversity and Inclusion; Employment Practice; the Environment and Health & Safety. I’m happy to see the most comprehensive review of the Codes since 2005”.

In response the architect and procurement campaigner Walter Menteth tweeted: “I believe Boris Johnson is an #RIBA hon fellow. Given his record is this still appropriate & do these changes provide for sanction against hon fellows in breach on grounds of integrity & honesty?”

Menteth, who has also been a RIBA Council member, added: “If the Parliamentary Standards Committee can isn’t it long time #RIBA also asserted & stood up [for] what is honest, accurate, decent & in the public interest?

“Let’s hope that the powers that be take a positive, pro-active & ethical decision & don’t procrastinate! If it were the medical profession & they were seen to be condoning lying I’m sure there would be no hesitation! #RIBA should aspire to match such standards.”

The code of conduct is aimed at RIBA members but Menteth told BD: ”It’s inconceivable that you can have a membership that stands on a platform of integrity and honesty and that the people appointed to become honorary fellows should be held to a different standard of behaviour.”

He told BD: “I think it’s outrageous. If architects want any position in the world of leadership how can they possibly be supporting his behaviour? It’s the second time he’s been up in front of Parliament’s standards committee. Institutions have to stand up and say, ‘This is the line’.”

He also questioned the RIBA’s policy of giving fellowships to politicians - Livingstone, Johnson and Khan - before the end of their tenures when their record could be judged.

Other architects who added their voice to the calls to strip Johnson of his fellowship were Fionn Stevenson, professor of sustainable design at Sheffield School of Architecture.

Brady told BD: “I’m not so sure Boris would be too bothered if he has an Hon FRIBA or not - but I think it should be considered an honour to continue to have one and that people need to abide by the ethics of integrity to continue to hold such a fellowship. If they don’t then some people will ask for it to be revoked not surprisingly.”

The RIBA Council ratified a sheaf of new policies this month, including:

:: Code of Practice for Chartered Practices

Where you can find the new RIBA codes and policies.

This article has been amended to make it clear that Simeon Shtebunaev has asked the honours committee to consider stripping anyone deemed unsuitable of their honorary fellowship. He was responding to a Twitter thread that began by singling out Boris Johnson.