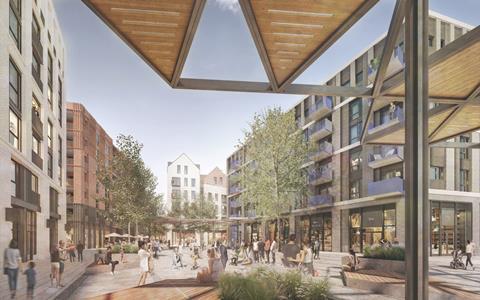 Broadway Malyan has downsized its controversial plans to build more than 1,000 homes in the historic city centre of Norwich a year and a half after the government rejected an earlier incarnation of the scheme.

Revised designs of the 4.7ha Anglia Square development unveiled by client Weston Homes yesterday have removed a much-criticised 20-storey tower and reduced floorspace by a third.

Jenrick said he had based the decision on the proposal’s “excessive size in relation to its context” and his belief the scheme had not demonstrated the “exceptional quality required by policy”.

Protestors had been fighting the scheme for three years, with the original 2018 planning application receiving 433 objections against just 63 comments in support. 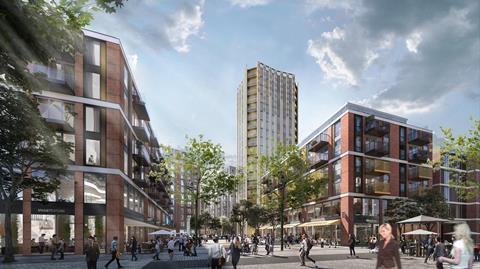 Broadway Malyan’s original 2018 designs for the site included a 20-storey tower, which has been removed in the new proposals

Save Britain’s Heritage said in 2020 that the decision to reject the plans had provided “a huge opportunity for a more enlightened development”. The group’s executive president Marcus Binney said at the time that Jenrick had “repelled the vandals at the city gate”, adding: “Norwich has been spared the most monstrous carbuncle that ever threatened to deface an English cathedral city.”

A new planning application was submitted to Norwich council on Tuesday.

Weston Homes said the original scheme’s cluster of large blocks ranging from five to 12 storeys in height have been broken up into a larger number of three to eight-storey blocks, bringing the floorspace down from 1.9 million sq ft to 1.23 million sq ft. 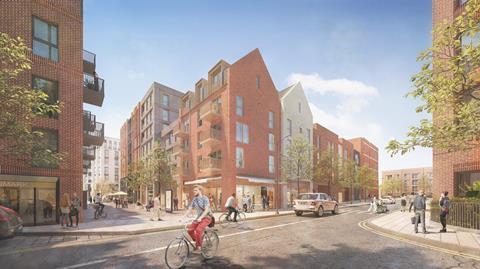 The developer said the new scheme has been designed around a series of inner courtyards, public squares and pedestrian streets informed by historic photographs of the area from the Victorian and Edwardian eras.

Weston Homes said the new designs, which feature red, white and flint grey brick or stone effect facades, would provide a series of “elegant contemporary buildings” that “compliment the existing character and street scenes of Norwich.” 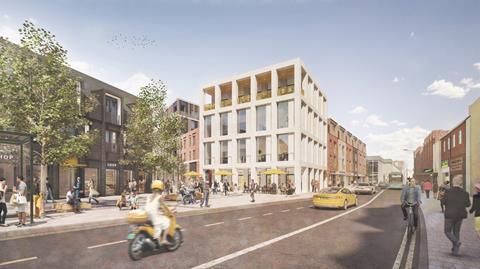 But Save Britain’s Heritage, which is a consultee on the scheme alongside Historic England and Norwich Cathedral, has slammed the initial images of the new proposals.

The group’s director Henrietta Billings said: “These glossy CGIs are designed to show the proposals in their best light. From what we have seen so far we have major concerns about the scale and bulk proposed for this sensitive site in the city centre conservation area.”

Broadway Malyan associate Lucas Ward said that developing the masterplan and design proposals has involved seven public exhibitions and meetings with more than 1,000 members of the public. 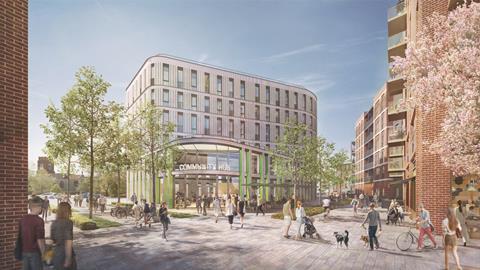 The number of homes has been reduced from 1,250 to 1,100 with total floorspace cut by a third

He said: “Our proposals are drawn from and reference the past and present character of Norwich to include new homes in a location where they have been absent for over half a century.

“Reinforcing the existing community offers the chance to refresh this key part of the city and provide a new place to live”.

Weston Homes chairman and managing director Bob Weston added: “With the new proposals for Anglia Square we have consulted in depth with local people and listened to all the key stakeholders. 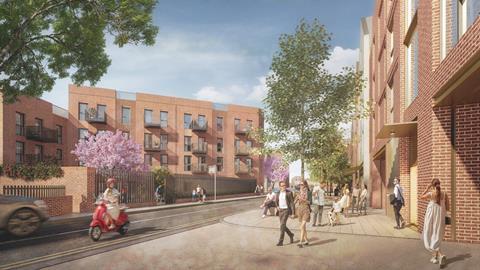 “After many months of hard work on the designs we hope that the new application will be well received by the planning committee and local people of Norwich.”

The housebuilder had initially refused to confirm that Broadway Malyan would be kept on as the scheme’s architect after plans for a costly legal challenge against Jenrick’s decision were dropped in April last year.

The firm announced that it would “return to the drawing board” to develop new plans that reflected objections made by heritage bodies.

Historic England had also commissioned architect Ash Sakula to draw up an alternative 600-home scheme for the site consisting of traditional streets and low-rise terraces. 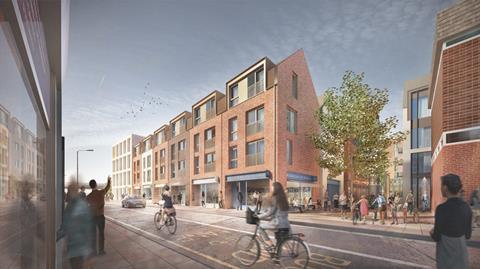