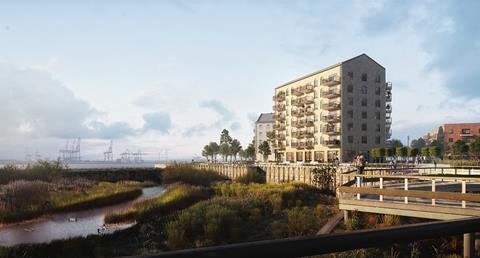 Architect BPTW has lodged plans for a 532-home development at Ebbsfleet Garden City in the Thames estuary.

The Kent scheme, situated on former industrial land on the banks of the Thames, has been submitted to Ebbsfleet Development Corporation for housebuilder and main contractor Bellway.

The 12ha site would consist largely of terraced houses leading towards a series of five- to seven-storey apartment blocks on the riverside, with 30% of the one to four-bed homes affordable.

Also included in the scheme is a new sports pitch for a local school, a riverside promenade and a large park to the east of the site.

The four-phase development is due to start on site later this year if it gets the green light.

Ebbsfleet Garden City saw a 281-home scheme from Countryside and Clarion Housing Group given the green light in April.