Proposals include 5,000sq m of industrial and community space

Council-owned developer Be First has been given the green light for plans to build a 156-home affordable housing scheme in Barking designed by BPTW.

Barking and Dagenham council, which owns Be First, approved the £60m proposals for the build-to-rent scheme on Thames Road in the east London borough shortly before Christmas. 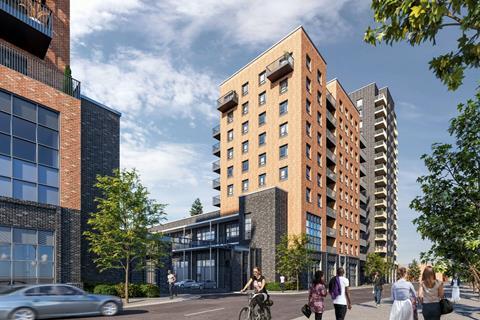 How the scheme will look when built

The mixed-use development will be built alongside 5,085sq m of light industrial space and will also include green spaces, play areas, balconies, green roof terraces and a cafe.

The scheme, which has been designed by architect BPTW, will be built on a corner site located at the entrance of the Barking Riverside regeneration area in the south of the borough. Be First is also acting as the planning consultant.

Construction is due to start in March this year.

In November, the developer was given approval for a 64-home affordable redevelopment of a former Royal British Legion hall and 18 adjacent flats in Dagenham.