Demolition notices have been posted on a significant 1960s building in Birmingham – the latest in a string of post-war buildings to bite the dust in the city, according to the Twentieth Century Society.

The society said it had been informed that demolition notices had appeared at Triplex House, a scheme designed by James A Roberts, architect of the iconic Birmingham Rotunda. 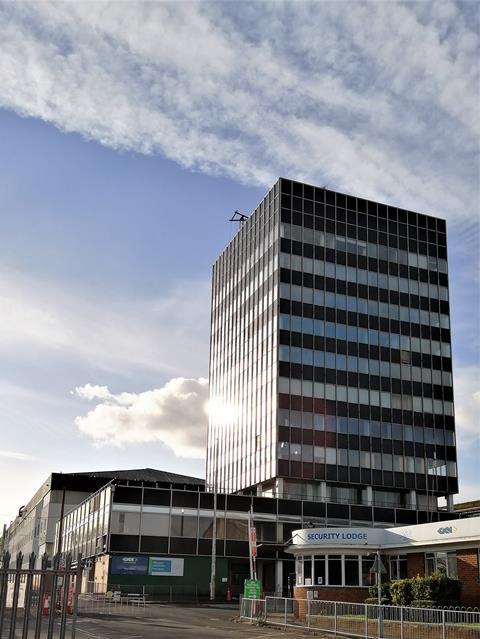 Roberts was a noted Birmingham architect active in the post-war period, producing three major schemes as part of Herbert Manzoni’s inner ring road development in Birmingham: the Ringway Centre, an unrealised proposal for the Bull Ring and the Rotunda, which is grade II listed.

Along with his contemporary John Madin, Roberts is closely associated with the post-war redesigning of Birmingham.

Despite this, most Madin and Roberts buildings have been, or are set to be, substantially altered or demolished.

Roberts’ Rotunda was listed in 2000 but re-clad in 2006, while the Ringway Centre was turned down for listing in 2016 and the following year the council approved a scheme to completely remodel the building.

The C20 Society recently called on Historic England to list Madin’s Birmingham Chamber of Commerce but this was unsuccessful and the Certificate of Immunity from listing, which was first granted in 2016, was renewed on 24 August this year, putting it beyond protection for the next five years.

Other post-war buildings under threat in Birmingham include TP Bennett and Son’s House of Fraser, which is currently on the market as a “refurbishment or development opportunity”.

Catherine Croft, director of the C20 Society, said: “Birmingham had an outstanding collection of brilliant, bombastic 1960s commercial buildings, but sadly seems intent on demolishing most of them. It’s such a pity as they were so confident and characterful and could so easily have been converted to new uses.”

Now with the posting of the demolition notices another of Roberts’ buildings seems destined for the scrap heap.

In February 2021, Birmingham City Council granted planning permission for the demolition of all the existing buildings on the King’s Norton site, including Triplex House, and the erection of eight commercial buildings for research and development of products or processes, industrial processes, general industrial uses and storage and distribution.

The applicant was the St Francis Group Ltd acting on behalf of Rorton Ltd.

Birmingham had an outstanding collection of brilliant, bombastic 1960s commercial buildings, but sadly seems intent on demolishing most of them

The C20 Society was alerted to the building’s imminent demolition earlier this summer and responded by calling on Historic England to spot list the building at grade II.

But the listing application was unsuccessful, with, Historic England saying Triplex House was “an important statement for the company” and “the use of glass curtain walling seems a natural choice for the business of glass manufacture”.

The report concluded that “its use of curtain wall glazing is somewhat late for its date” and ultimately “it falls below the bar for listing buildings of the period”.

Formed in 1912, Triplex manufactured toughened glass for the motor and aviation industries and was a leading manufacturer in the field.

The company purchased the King’s Norton site in the late 1920s and in the early 1960s commissioned Roberts to design a new office. The office building was constructed between 1964 and 1966 to house the company’s administrative and welfare functions.

>> Ben Flatman: John Madin was first a victor, then a victim of Birmingham’s identity crisis

Triplex House is 12 storeys high and is clad in an anodised aluminium curtain wall. It is well preserved externally partly because Triplex was taken over by Pilkington’s Glass in 1993 who used the Kings Norton building as a subsidiary set of offices.

It is planned around a lift, staircase, and lavatory core, and the kitchen and dining rooms take up the whole of the first floor. Conference rooms with full height double glazing occupy the second floor. This level also provides access to paved roof terrace and bridge link to the neighbouring factory.

The third to ninth floors were open-plan office floors and have windows using Triplex’s own laminated glass. Executive offices are located on the 10th floor, the 11th being completely taken up by plant.