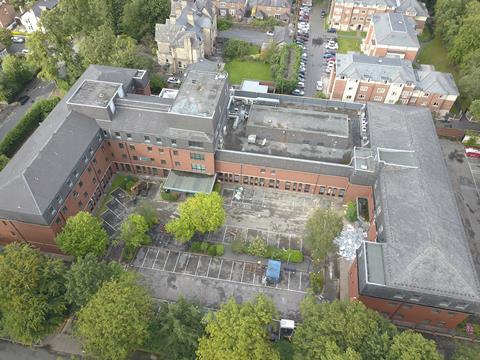 A former hospital on the site in Whalley Range, south Manchester, has now been demolished to make way for the new housing

The architect is part of a team with Anchor Hanover Group which has been named preferred bidder by Manchester council.

The scheme will include more than 100 apartments for people aged 55 or over, with a mix of affordable rent and shared ownership tenures, to ensure the homes are as accessible as possible to Manchester people, said the council.

A spokesperson for Hanover – England’s largest non-profit provider of later-life housing and care – said the group was about to launch a new architects’ framework and invited Building Design readers to register their interest here.

The Russell Road housing, planned for a former hospital site in Whalley Range, south Manchester, is also the first LGBT+ older person’s housing project to have been co-produced with the LGBT Foundation and the local community, said a council spokesperson.

The competitive process required bidders to demonstrate their experience in delivering similar projects across England, with Hanover pointing to its New Larchwood LGBT+ inclusive retirement housing scheme in Brighton.

Manchester’s scheme was first agreed by the council’s executive in 2017. Since then it has been working with the LGBT Foundation to develop the core principles of the scheme, how it should operate and what care should be available onsite to support LGBT+ people as they get older.

Homes England has given the LGBT Foundation funding to create an online “learning journal” about the history of the Manchester scheme, to help other councils and cities develop similar schemes.

Designs for the Russell Road LGBT+ Extra Care will now be developed in collaboration with a community steering group made up of councillors, residents and members of the LGBT community.

Paul Martin, chief executive of the LGBT Foundation, welcomed the appointment. “Everyone deserves to have access to safe, affordable housing where they can be sure they feel secure and welcome,” he said. “Many older LGBT people have grown up in a world hostile to their identities and are worried about their future, particularly if they are likely to require care in later life. This scheme is a vital and exciting step forward for our communities and the learning journal will track our journey and share recommendations for other schemes that will follow.”

Russell Road is part of a programme of 730 extra-care homes built in the past few years for older people in the city.