Work on scheme, which is being developed by British Land, is set to start next year 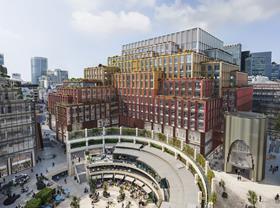 British Land’s plans to replace the southern-most element of London’s Broadgate Centre with a new AHMM-designed 14-storey scheme have been given the go-ahead by City planners.

The City of London Corporation’s planning committee unanimously approved the application for 1-2 Broadgate (pictured) at a meeting held last week.

Sir Robert McAlpine is set to start work on the deal, which is worth around £300m, next year.

AHMM’s scheme will include 74,178sq m of new floorspace, almost 45,000sq m of which would be new offices, with 21,350sq m of retail, restaurant and leisure space earmarked for its lower floors.

David Lockyer, head of Broadgate at British Land, said: “This decision gives us the opportunity to deliver an exemplar building so we can continue to attract a range of leading businesses, including high-quality retail and leisure operators.”

The approval of AHMM’s plans follows on from British Land’s decision to start work on the refurbishment of 1 Finsbury Avenue, which is due to complete soon, and the developer’s 135 Bishopsgate, which is due to finish in the middle of this year.

All the schemes are part of British Land and Singaporean financial backer GIC’s £1.5bn investment plan for the 32 acre Broadgate campus, where around 1m ft2 is under development.