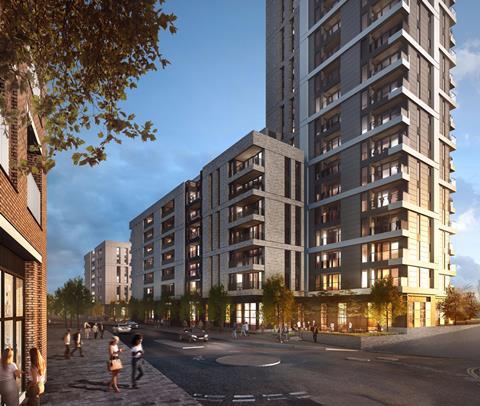 Make has been given the all-clear for a new residential development as part of the Old Oak regeneration scheme in west London.

Mitre Yard is among the first private sector schemes to come forward as part of the Old Oak and Royal Park regeneration scheme.

The project includes three buildings, a courtyard block overlooking the Grand Union Canal, a street block along Scrubs Lane and a tower.

Across the trio of buildings there are are two lobbies and 200 build-to-rent apartments, including affordable housing.

There will also be a space at ground level that can be used as shops, offices, cafés or restaurants.

It is the second private sector scheme to be brought forward as part of the Old Oak programme following an Allies & Morrison scheme that was given the go-ahead in April last year.

North Kensington Gate South will provide 164 units and will include commercial and retails space at ground floor level. It will comprise three blocks rising between six and 22 storeys. The 11-storey North building will feature 47 new homes.

In total, the Old Oak and Park Royal Development Corporation’s regeneration programme is expected to deliver 25,500 new homes and 65,000 jobs.

The entire scheme has a gross development value of £26bn.