London mayor Sadiq Khan wants to remove density restrictions and promote the development of small sites as key ways the capital can push up the delivery of new homes.

The measures are contained in today’s draft London Plan blueprint for the city’s growth in the years up to the early 2040s.

As well as calling for intensified development in areas with good transport connections, and a scrapping of capital-wide density targets for such sites, the draft policy document – which runs to more than 500 pages – also calls for strengthened design practices.

Among them are the mandatory use of design review for some categories of scheme requiring mayoral consent; an end to the practice of settling key design issues by “reserved matters” at the very end of the planning process; and encouraging architect-retention clauses in planning approvals.

But for many in the design and construction sectors, the key area of interest in the draft plan – which goes out for a two-month consultation on Friday – will be the measures Khan expects to help London deliver a targeted 65,000 new homes a year, a figure 1,000 lower than that previously touted by the mayor as its annual “need”.

The mayor said that previous density guidance was “meaningless” and that local planning authorities would be able to assess proposals on a site-by-site basis, taking into account design quality and the planned provision of future transport services.

Areas deemed particularly suitable for high-density housing are those within new growth corridors, such as the Crossrail and the proposed Crossrail 2 route, London Underground’s proposed Bakerloo Line extension, the London-Gatwick-Brighton mainline, and the and HS2 route from Euston.

Khan said local planning authorities should work with developers and housing associations to determine the capacity of sites based on the surrounding infrastructure, and that proposals that did not “clearly maximise housing density” should be refused.

Khan’s 65,000 homes-a-year target includes an uplift in the delivery of properties through smaller development sites, with around 24,000 new homes being delivered through developments of 25 properties or fewer. 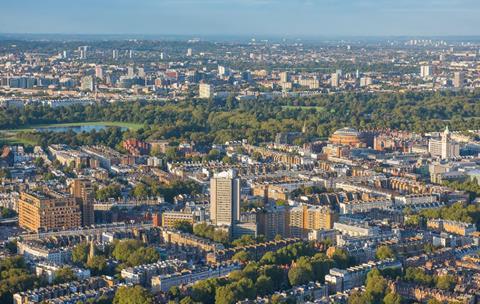 A borough-by-borough breakdown of areas most ripe for the delivery of new homes via small sites was topped by Croydon, Barnet and Ealing.

In relation to small-scale development, the draft plan identifies sites within 800m of Tube or rail stations, or a town-centre boundary, as being particularly suitable for infill development – such as building new homes in existing gardens.

It proposes a “presumption in favour” of developments such as infill schemes and upward extensions where they deliver new housing units and will not breach conservation guidance.

On high-rise development, Khan’s plan resolutely refuses to change tack from the current approach, stating that the mayor “supports tall buildings” where they are in the “right places and to high design and safety standards”. The document orders boroughs to identify locations where tall buildings are “suitable in principle”.

Khan said the draft plan had started from scratch in comparison with its predecessor blueprints, and had an ambitious focus on “good growth” that was socially and economically inclusive.

“I am using all of the powers at my disposal in my first draft London Plan to tackle the housing crisis head on – removing ineffective constraints on homebuilders so that we can make the most of precious land in the capital to build more homes in areas with the best transport links,” he said.

“My London Plan sets out how we are planning for the challenges our great city faces, but crucially focuses on my vision of a London that welcomes growth, celebrates its diversity and ensures every Londoner gets the opportunity to fulfil their potential.”

Andrew Boff, Conservative Party housing spokesman on the Greater London Assembly, said Khan had “declared war on the suburbs” with a plan that would make the capital’s outer boroughs “browner, overcrowded and harder to get around”.

“The abandonment of sensible unit restrictions will see families crammed into rabbit hutch developments with no provision for parking if they live anywhere near a train station,” he said.

“The mayor’s entire approach signals a downgrading in the quality of the capital’s housing and will leave outer London browner, overcrowded and harder to get around.”

“The London Plan goes further to address this issue than the proposed changes to national policy laid out in the Government’s Housing White Paper,” he said.

A consultation on the draft plan begins on Friday and continues until early March. The document is expected to undergo an examination in public later in 2018 and is earmarked for adoption the following year.