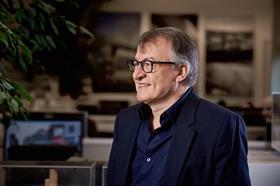 He has been appointed the trade body’s new deputy chairman and will take over from current chair John Nolan next June.

Hodder (pictured), whose practice Hodder Associates was drafted in last year to replace Make on a 40-storey tower being planned by former Manchester footballers Gary Neville and Ryan Giggs in the middle of Manchester, begins his new role with immediate effect.

Nolan will revert to being deputy chairman for 12 months when he stands down next summer.