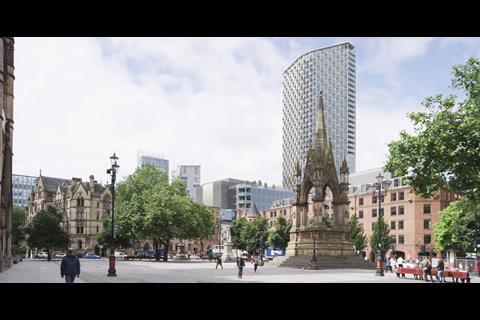 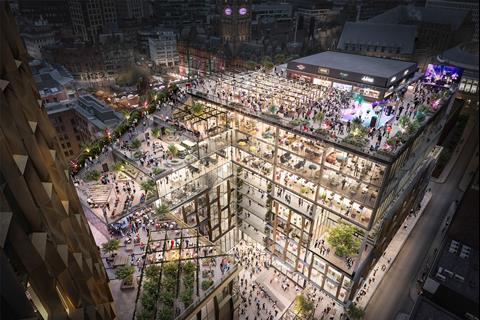 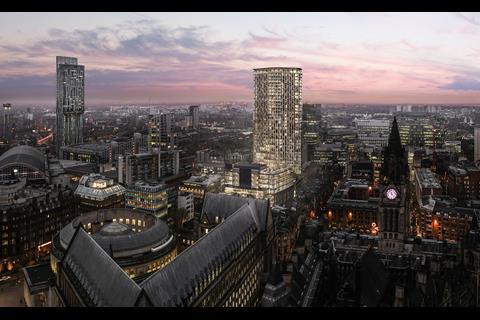 Conservation group Save has fired a salvo of objections against a controversial development proposed for the centre of Manchester by former footballers Gary Neville and Ryan Giggs.

The charity has submitted a detailed 12-page rebuttal written by a retired planning officer attempting to demolish all 44 of the stated public benefits attributed to the scheme by its backers.

The £200m St Michael’s proposals have been recommended for approval by the city’s planning officers ahead of a decision by the planning committee this Thursday.

They feature a 40-storey tower with up to 189 apartments and a 216-room hotel. A separate 10-storey block would contain 13,721sq m of new commercial space.

The scheme was redesigned by former RIBA president Stephen Hodder’s practice Hodder & Partners after Make was dropped from the project amid an earlier row about its design.

Hodder’s plans would demolish fewer historic buildings but Save director Henrietta Billings said it was a “fantastically sensitive” area, and argued the existing buildings on the site could be adapted and extended – “without a 40-storey tower crashing into the historic core of the city”.

Marcus Binney, the charity’s executive president, said: “The revival of Manchester’s near dormant historic core over the last 30 years into a vibrant city centre full of restored Victorian buildings and well-designed modern ones is an outstanding achievement.

“It has depended not on flashy iconic buildings but first-class local architects who have maintained the muscular grit of the city centre responding to its red brick warehouses, mills and office chambers. Manchester planners must not be allowed to destroy their own finest achievement.”

Save commissioned Alec Forshaw, former head of heritage at Islington council and now an independent planning consultant, to write the report.

He argues that many of the benefits claimed by the applicant are not public benefits within the definition of the National Planning Policy Framework.

“We consider that several of the claimed benefits appear to be exaggerated with others not backed up by evidence,” he said.

“In our view, the very significant degree of harm caused by the proposal far outweighs any potential public benefits from the scheme.

“For example, the applicants list the new ‘high-quality apartments for a growing and higher-skilled workforce, aimed at higher-earning executives and personnel’ as a public benefit of the scheme.

“We argue the provision of luxury flats in not a public benefit. On the contrary there is no provision of social housing in the scheme.”

Manchester planners acknowledged “finely balanced judgement” was needed but said: “The uses proposed would make an important contribution to the economic growth of the city.”