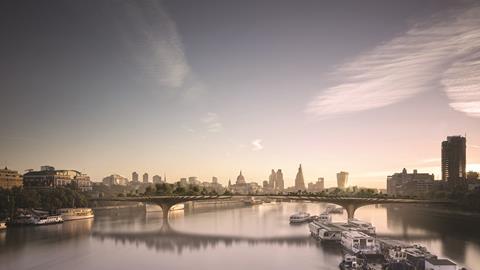 Charity behind controversial Thomas Heatherwick-designed bridge to be wound up

The charity set up to drive the development of London’s hugely controversial Garden Bridge plans has formally sounded the death knell of the project.

A statement from the Garden Bridge Trust said Mayor of London Sadiq Khan, Transport for London, and the Department for Transport had been informed that trustees had taken the decision to wind up the operation, effectively throwing in the towel on the Thomas Heatherwick-designed structure.

The project has already used up £37.4m of public money and the agreement to underwrite cancellation costs by the government could bring the bill to the taxpayer up to £46.4m.

Earlier this year Khan announced that he would not be a guarantor for the annual maintenance cost of the bridge, following an independent review of the project by MP Margaret Hodge that shone a spotlight on a £70m funding gap and predicted the eventual project cost could be £200m.

Guaranteeing maintenance costs for the bridge had been a condition of planning permission for the structure, but the trust insisted it would seek alternative solutions. It’s latest statement acknowledges a failure to find any.

“Garden Bridge Trust has examined in detail all options available to it,” it said.

“This included discussions with a potential benefactor who was keen to provide the required guarantee. It also had further discussions with the government. Unfortunately, the benefactor concerned and the trustees have all concluded that they cannot proceed with what was always designed to be a public project in the heart of the capital without the support of the mayor of London.”

The trust said the project would now be formally closed. “This includes terminating contracts, and concluding donor funding agreements,” it said. “The trust itself will then be wound up in accordance with the Companies Acts.”

Trust chair Lord Mervyn Davies said the organisation was “incredibly sad” to have been unable to make the bridge a reality, a situation he laid at Khan’s feet.

“We had made great progress obtaining planning permission, satisfying most of our planning conditions and we had raised £70m of private money towards the project,” he said.

“The Garden Bridge would have been a unique place; a beautiful new green space in the heart of London, free to use and open to all, showcasing the best of British talent and innovation. It is all the more disappointing because the Trust was set up at the request of TfL, the organisation headed up by the mayor, to deliver the project.