Footballers-turned-developers Gary Neville and Ryan Giggs will submit the third set of proposals to build a tower in the middle of Manchester to city planners at the end of next month.

Hodder + Partners is behind the latest design which will see a 39-storey tower replace a brace of towers drawn up by the scheme’s previous architect Make.

That scheme was formally scrapped earlier this summer after Make pulled out of the work which would have seen it build two towers of 21 and 31 storeys.

Hodder, a former RIBA president, had been drafted onto the scheme earlier this year after Make’s plans ran into problems with heritage groups who complained the towers threatened to ruin historic parts of Manchester’s skyline.

The surrounding area contains 72 listed buildings and nine Conservation Areas sit within 250m of the site at Jackson’s Row.

Historic England said Make’s proposal would “irreparably damage the special character of the surrounding conservation area” while Save Britain’s Heritage called it “a blot on the centre of one of Britain’s greatest cities of a magnitude not seen in decades”. 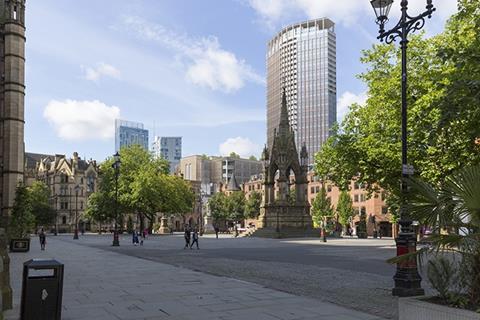 The scheme, seen from Albert Square, will include a nine-storey office block seen here to the left of the tower

The main tower will include 19 storeys of residential which will run across the top half and 12 floors of hotel which is set to add to the city’s handful of five star hotels. A spokesperson for the developer St Michael’s said it was in discussions with an unnamed hotel operator.

The new proposals now include retaining a local pub, the Sir Ralph Abercromby which dates back to the early nineteenth century and which was slated for the wrecking ball under the Make plan, after the developer said it recognised “its emotional importance to the community” while the frontage of the former Bootle Street Police Station, built in 1937, will also be kept.

But work will still involve demolishing the Manchester Reform Synagogue, built in 1953.

But he added: “We were encouraged by the generally positive response to July’s consultation and by calls from certain quarters to be bold in our ambition and create something remarkable on the city’s skyline.”

The 134.5m high tower has been relocated to the western edge of the site away from the grade I listed Manchester Town Hall while Hodder said the tower would present an “elegant ‘blade-like’ face to St Ann’s Square” which is home to a number of listed buildings including the grade I listed Church of St Ann.

Neville is hoping work on the £200m scheme can start next spring with completion due to take three years. Construction will be carried out by Chinese contractor Beijing Construction Engineering Group. 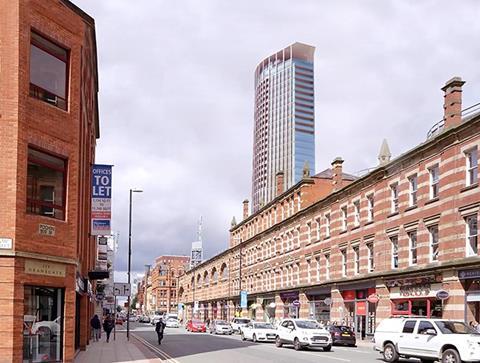 How the tower will look from Deansgate