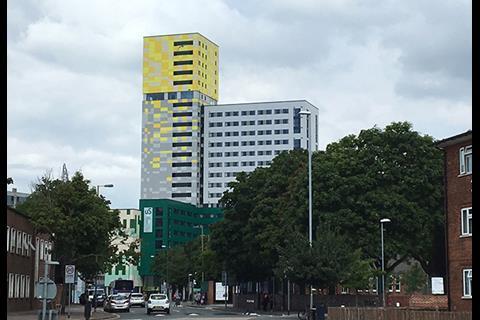 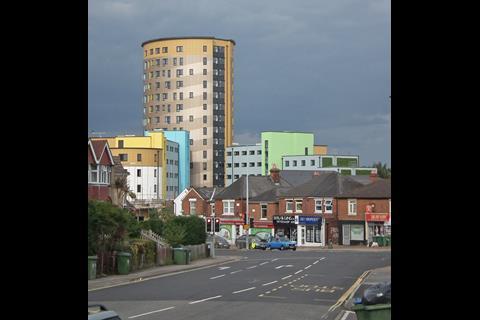 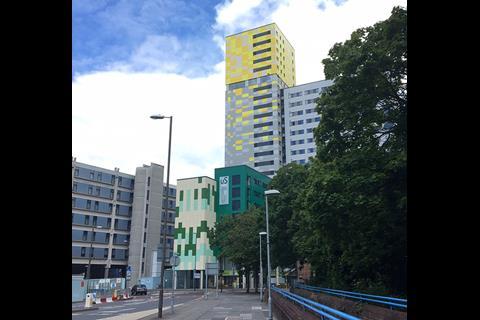 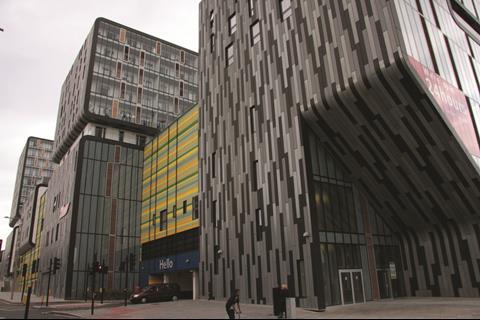 Spot the difference: the variegated yellow and grey cladding panels of Woolwich Central, winner of the 2014 Carbuncle Cup 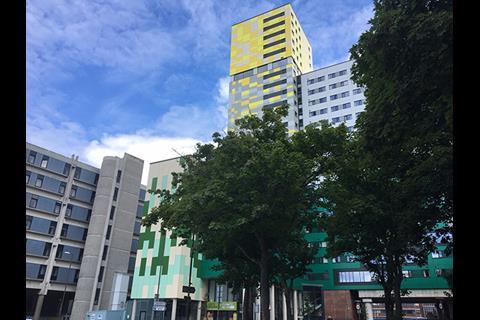 Greetham Street Student Halls looks like the unfortunate offspring of two former Carbuncle Cup nominees. City Gateway in nearby Southampton made it onto the 2015 shortlist for its centre piece; a distinctive tan and beigecoloured circular tower. This was nicknamed the ‘fag butt’ by unimpressed locals. Taking its cue from City Gateway, Greetham Street Student Halls also features a tower with two tone cladding and the same discordant jumble of multi-coloured rectilinear blocks at the base. The variegated yellow and grey cladding festooning the tower has an overpowering whiff of Woolwich Central, winner of the 2014 Carbuncle Cup.

The nominator, Kieran Clarke found the cladding used on Greetham Street and the ungainly proportions particularly offensive. ‘It seems that the building’s architects were either colour blind when choosing the external cladding or wanted to blind others with the bright yellow cube at the top of their tower. Mint green, lime green and dark green panels at the base of the tower jostle with the cream, white and (to put it nicely) puke coloured cladding panels which cascade down the building’s top.’

At the base of the tower passing pedestrians are greeted with a sight reminiscent of a motorway bridge. Concrete posts at ground & first floor level support the rest of the building, giving it a permanently unfinished appearance.’

Please keep sending your Carbuncle Cup nominations in to the editor at Thomas.Lane@ubm.com. Include a short citation explaining why it deserves to win architecture’s wooden spoon and a few publishable photographs taken by you to illustrate your case.