Architecture worth £6.7bn to UK economy

Architecture is worth £6.7bn a year to the UK economy, according to new figures.

The country is also a net exporter of architectural services, with exports in 2016 worth £439m, while imports were valued at £41m. 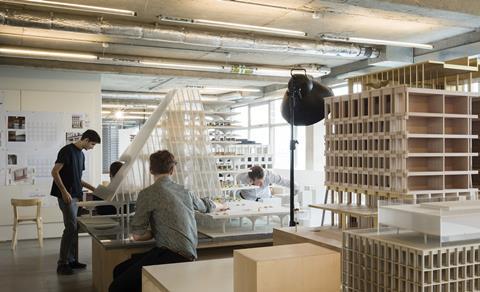 David Chipperfield Architects’ London office. The practice has projects all over the world

The figures are included in a report published by the GLA and London Festival of Architecture on the value of architecture in London launched this week at the Mipim property fair in Cannes.

The report found that the capital’s architecture sector outstripped the wider London and UK economies, growing by an average of 7.7% a year since 2009. It produced £1.9bn in gross value added (GVA), a measure of the value of goods and services produced.

Architecture accounts for 26,200 jobs in London – a quarter of all architecture jobs in the UK – while there are 15,000 architects in the capital employed by 4,515 practices.

The gross median hourly wage excluding overtime in London was £18.33 last year, above the city’s average of £16.72.

However the report found London’s architecture scene is less diverse than it might be.

Just 16% of all architecture and engineering jobs in London (the narrowest sector for which data exists) are held by people who are black, Asian or of minority ethnic background (BAME). The average for all sectors in London is 31%.

Just 37% of architect jobs in London are held by women. This is better than the UK-wide figure of 31% but has yet to recover its historic peak of 40% before the economic crash in 2008.

EU nationals fill about a quarter of architecture jobs in London, a proportion that has remained constant since 2014, despite the EU referendum

Just under a third of undergraduate and 37% of postgraduate architecture students are from outside the UK.

London Festival of Architecture director Tamsie Thomson said: “It’s disappointing – but not surprising – to see that while London’s architecture sector outperforms in economic terms, it continues to lag behind in terms of diversity.

“We must do more to ensure that our profession reflects the society it seeks to serve. London architecture’s brilliance and continued global leadership depends on us being an open profession without barriers.”

She added: “Architecture is critical to London’s success – not only in terms of shaping the city but also as an industry that supports thousands of jobs and contributes many millions of pounds to the economy. It’s a global success story that’s heavily reliant on global talent – and while the figures are heartening they’re also a reminder of what could be at risk if Brexit negotiations are badly handled.”

He vowed to use the mayor’s Good Growth by Design Programme to “champion diversity” within the profession.