Schemes plunged into uncertainty but clients vow to press on 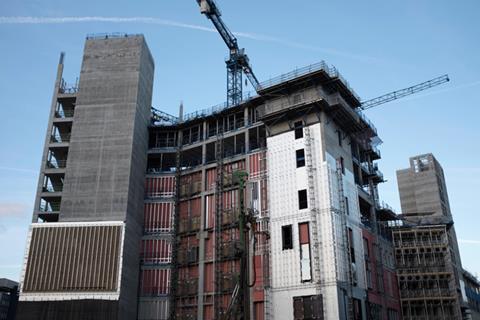 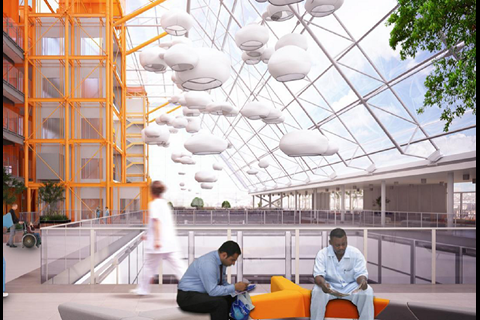 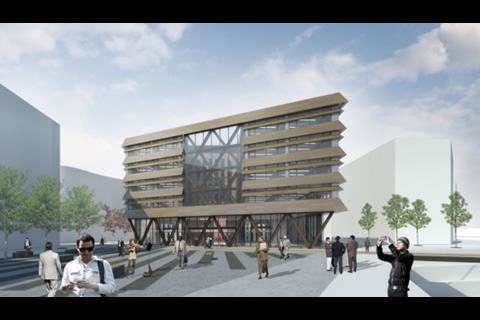 Artists' impression of Feilden Clegg Bradley Studios' The Vaux building in Sunderland, which was being constructed by Carillion. 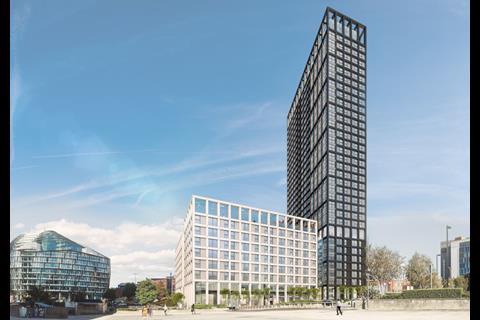 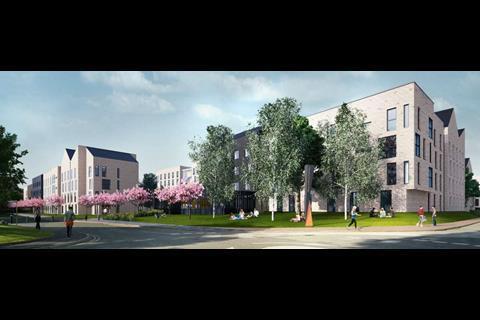 Artists impression of Manchester University's Fallowfield Student Residences project, which was being delivered by Carillion under a design-and-build contract 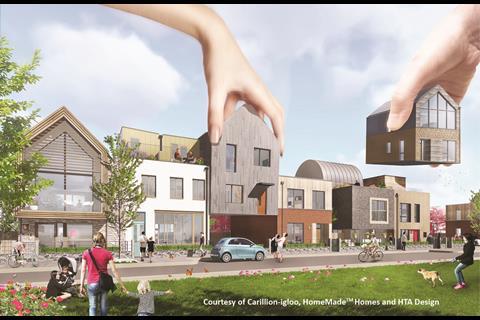 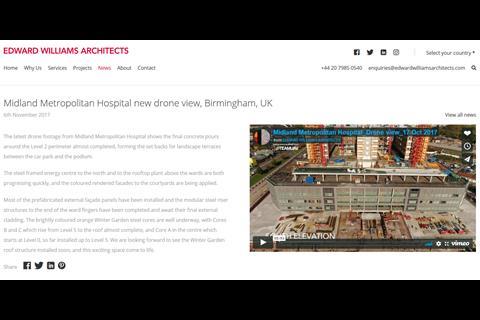 Construction staff have stopped work on a string of major projects across the country in the wake of Carillion’s collapse.

Work reportedly stopped yesterday at the £700m Paradise redevelopment in the centre of Birmingham, according to local media.

Carillion was one of the main contractors on the scheme’s first phase which includes Eric Parry’s One Chamberlain Square. Developer Argent said the office – ironically slated to be occupied by liquidator PWC – was more than 80% complete.

Rob Groves, Argent’s regional director, said its strong relationships with the supply chain and main contractors along with a robust contingency strategy meant they were confident Parry’s building would “not be adversely affected”. Parry’s office did not return BD’s calls.

At the same time, the BBC was reporting that workers had been sent home from the £350m Midland Metropolitan Hospital project in Smethwick. The architects are HKS and Edward Williams Architects. A third architect, Sonnemann Toon, said it had not been involved in the project for two years. 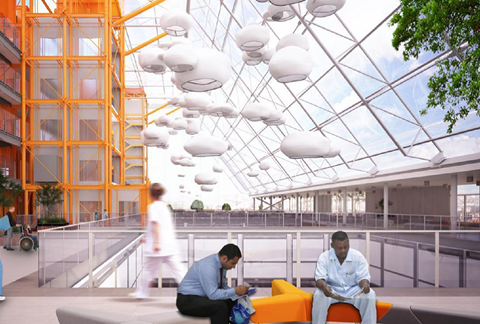 The BBC quoted a construction worker as saying: “Everyone on the site got told: ‘That’s it, go home.’ My company said, ‘You’ve been laid off.’ They’ve literally locked the gate. They’ve told us we can get our personal tools off the site if they’re small, but that’s it.”

Toby Lewis, chief executive of the NHS trust, said they were working closely with the Treasury to ensure the project would be completed.

HKS was also working with Carillion on the much-delayed £335m Royal Liverpool University Hospital, which it designed with NBBJ.

Aidan Kehoe, chief executive of the NHS trust, said they were implementing contingency plans and that the hospital would be built. They were covered by insurance and could engage a new contractor to complete construction, he added.

Francis Gallagher, HKS principal and EMEA regional managing director, said: “It’s saddening for everyone involved when a project partner hits difficulties such as this.

“We have a global practice and this minimises risks and exposure for us. It is far too early to say what will happen with individual projects, but we will be working closely with stakeholders to ensure the best possible outcomes for the schemes we are involved with.”

The two delayed public-private partnership (PPP) hospitals were today being blamed by analysts as among a very small number of big contracts that sealed Carillion’s fate.

Meanwhile Sunderland City Council confirmed that work on a Feilden Clegg Bradley Studios-designed office block in Sunderland had been suspended. The Vaux scheme, masterplanned by Urbed with input from Ash Sakula on the site of a former brewery, is one of a number of regeneration projects in the pipeline for the city as part of its Siglion regeneration joint venture with Carillion and Igloo.

“The council has been notified by Carillion’s liquidator that building work on Vaux phase one has ceased with immediate effect,” the authority said. “The council is in discussions with Carillion and liquidators PricewaterhouseCoopers regarding next steps and to ensure that work is resumed and the phase one building is delivered as soon as possible.”

It said the building, which had been scheduled for completion this summer, was Siglion’s only active project being delivered by Carillion Construction, and that the company had already made its equity investment “in full” into Siglion.

Urbed director David Rudlin said: “We are all paid up for our work on Sunderland. I’m not clear of the impact on Siglion yet. It is a three-way partnership between Sunderland, Igloo and Carillion and our hope is that it will continue. The first phase is certainly well into construction.”

Elsewhere in the north east, Carillion was a stakeholder in the FaulknerBrowns-designed Milburngate mixed-use regeneration project in Durham until it sold its share in the £150m scheme to partners Arlington Real Estate and the Richardson family.

Demolition work to clear the site is still going on and had been overseen by Carillion, with the city’s former HM Passport Office due to have been cleared by the end of this month. A spokesman for the project said the construction firm that would build out the project had never been formally announced. He said work would start on site this year and be unaffected by Carillion’s demise. 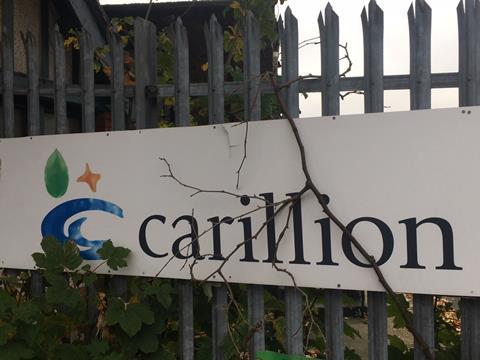 In Manchester, Carillion was delivering PRS specialist Moda Living’s 36-storey Angel Gardens development, for which HAUS Collective is the project architect and Ryder Architecture is also part of the design team. Carillion began construction of the £154m scheme, which will deliver 466 new homes, a cinema, shops, restaurants and a gym at the beginning of last year. Moda advertises the development as ready for occupation in January next year, but had not responded to BD’s request for comment at the time of publication.

Carillion had also been working on a £71m design-and-build contract for the delivery of new student accommodation for Manchester University, known as the Fallowfield Student Residences project for more than 1,100 study bedrooms in eight low-rise blocks, plus an energy centre. The university yesterday confirmed the business was principal contractor for the scheme, but said only: “At this stage we are considering our options and have no further comment to make.”

Carillion was also building phase one of the Battersea Power Station redevelopment which included flats designed by SimpsonHaugh and dRMM.

dRMM director Sadie Morgan told BD: “We don’t have any exposure there because we’re coming to an end at Battersea and have been paid. We are pretty lucky in that respect. It’s sad when any business goes into receivership – and we had a good working relationship with them – but it’s not going to impact us.”

Carillion had entered into a joint venture with developer Igloo for a number of residential-led projects around the country including the Heartlands custom-build pilot project on a former mining complex in Cornwall where AOC was the architect option for customers. HTA was urban designer on the project.

AOC director Geoff Shearcroft said: “Currently we are not aware of Carillion’s collapse impacting us at Heartlands. As designers of the littleBIG house, a custom-build home, we are employed directly by customers. We plan to build out for our existing customers this year.

”One of the advantages of custom-build models, like littleBIG house, over the volume housebuild model is the focus on small-scale development with a significant reduction in the associated risks. I hope recent events will allow us to replace the increasingly flawed ‘too big to fail’ with the productive potential of ‘small is beautiful’.”

Architects working with Carillion-Igloo at the Malmo Quay regeneration project in Ouseburn, Newcastle, include Mikhail Riches and Featherstone Young but both said work ground to a halt a long time ago – because the site proved tricky to develop – and they were not affected by Carillion’s demise.

Chris Brown from Igloo said all the JV assets would be transferred to Igloo.

Have you been affected by the Carillion collapse? Email elizabeth.hopkirk@ubm.com or call the BD newsdesk on 020 3011 3135.