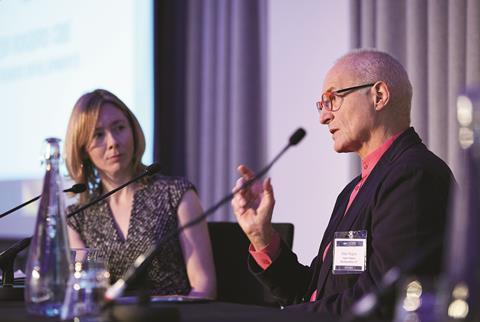 The developer behind the tallest tower going up in the Square Mile has admitted that nervous tenants spooked by Brexit are not piling into the PLP scheme in the way he had expected.

Construction has already reached above level 30 on both concrete cores at the 62-storey 22 Bishopsgate tower which is set to be completed by the end of 2019.

But Peter Rogers – who along with property veteran Stuart Lipton is developing the site of the former KPF-designed Pinnacle under the Lipton Rogers name – said no formal pre-lets have been inked. But he said a number of prospective occupiers are in contact and he expects a deal early in the new year.

The job was put on hold for three months after last June’s vote to leave the EU, with Lipton Rogers and investor French insurer Axa eventually deciding to press on with the scheme.

Rogers said: “We are in the process of pre-letting but it’s slower than we would like. Brexit has slowed it. We will let it because there is going to be a shortage of space [in the City] when it is finished. We expect the first deal to be signed early in the new year.”

The tower will have enough space to house 12,000 workers and will be 278m tall when it is completed, eclipsing KPF’s 230m-high Heron Tower and making it the tallest building in the City of London.

Rogers, who was speaking after giving the keynote speech at this week’s Building Live conference, said interest in the scheme so far was mainly from firms based in London within the legal, insurance and banking industries.

But he added that a number of firms in the IT sector, having outgrown space elsewhere in the capital, were also in contact. “There are some interesting firms looking at coming down from Old Street,” he said.

“London is an incredibly vibrant city and people like to work here. [Firms] need to be somewhere where their staff want to live.”

Rogers also defended the design in the face of opposition by the boroughs of Islington and Tower Hamlets, as well as from Royal Parks and Historic Royal Palaces.

He admitted KPF’s original Pinnacle design, nicknamed the Helter Skelter, was “very beautiful” but added it was “very complicated to build [with] unusual floor plates”.

He said the new building had been designed as a “post-financial crisis building” and added: “We saw an opportunity to build very large floorplates. Did we want to show off more or get bigger floorplates? You can have lots of iconic buildings but most of us don’t do iconic things. Icons can add cost by being branded. We needed a business building rather than a visual building.”

The £1bn development was rescued back in 2015 after Axa bought the site from its former Saudi Arabian owners.

The site had been mothballed since 2012 when finance dried up, after construction of only nine floors of concrete core at the then Helter Skelter – earning it the nickname “the stump”.

Lipton Rogers partner and co-founder Peter Rogers has said the construction industry is being overrun with “paper pushers” and has not enough focus on bringing in people with construction skills.

A trained engineer, Rogers worked for Sir Robert McAlpine before he and Stuart Lipton helped set up Stanhope more than 30 years ago. His rollcall of projects in London includes developments at Broadgate and Paternoster Square.

But he told this week’s Building Live the industry had become too bureaucratic: “It’s too much about pushing paper rather than skills.

“You have a big project and all these managers, and I wonder what they’re all doing. The real risk is the design and building of a scheme, not the process behind it.”

And he added: “There are too many managers and not enough common sense. Too much is simply passed from person to person.”

Rogers, who helped set up Lipton Rogers in 2013 after leaving Stanhope that year – eight years after Lipton sold his stake in the developer – added that the pair were eyeing a number of “distressed” tall tower schemes yet to be built in the capital, as well as assisted living schemes in the middle of London, for when the work at 22 Bishopsgate started winding down.