Some precious Mac relics and part of rebuilt library are safe 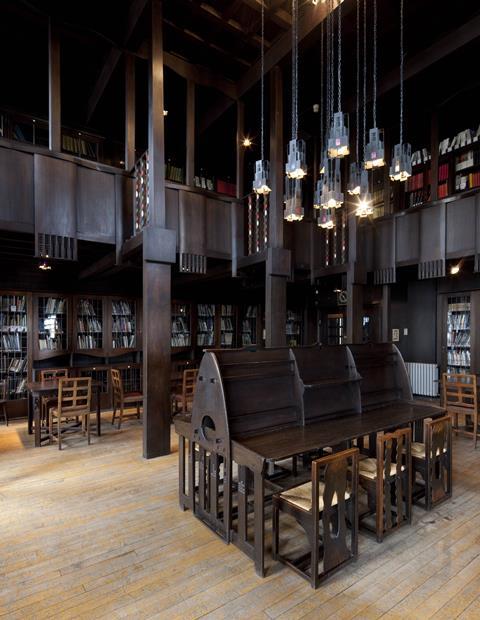 The original Mackintosh library, in a picture taken before the 2014 fire

The decorative carvings for the Mac’s rebuilt library and some of the original Mackintosh furniture were still in storage awaiting installation at the time of Friday’s fire, it has emerged.

The decorative carvings were created by craftsmen to Charles Rennie Mackintosh’s original designs after the library was destroyed by the 2014 fire.

The structure of the rebuilt library had already been installed and has been lost. But quite a few original Mackintosh items have survived, including some furniture, the clock faces that survived the 2014 fire and all the works on paper, the school told BD. 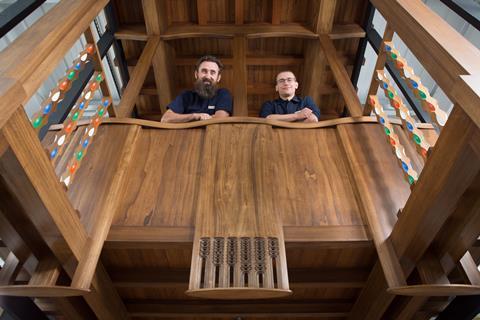 An illustrative picture taken between the two fires of master craftsmen Angus Johnston and Martins Cirulis of Laurence McIntosh in the prototype of a Mackintosh library bay they created, showing some of the decorative elements

“In terms of fixtures that were part of the Mackintosh Building it is too soon to say what might have survived, but the finials on the top of the building have both miraculously survived,” said a spokesperson.

The rebuilding of the famous “hen run” on the top floor of the grade A building was almost complete and has been largely destroyed.

But while the new windows in the south façade had been fitted at the time of Friday’s fire, those in the west (Scott Street) façade had not and are safe.

The glimmers of good news came as the first officials from the school were allowed inside the building to survey the damage.

Staff from the GSA’s School of Simulation and Visualisation, together with experts from Glasgow council, Historic Environment Scotland and specialist structural engineers David Narro Associates got their first look at the interior on Monday.

The school’s director, Tom Inns, and chair of governors Muriel Gray were allowed in for the first time yesterday. 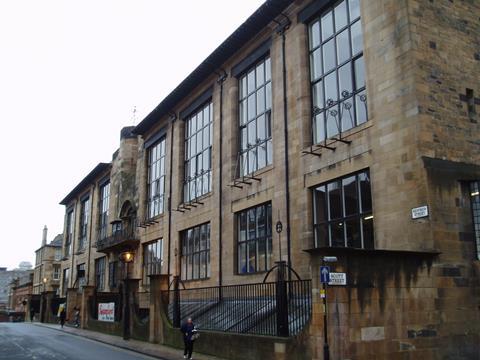 “We would like to express our thanks to Scottish Fire and Rescue Service and Police Scotland for allowing us to come up on to the site today and for enabling access yesterday in order to begin assessing the condition of the building,” said Inns.

“This was the first opportunity for the expert team to see the building and begin what will be a long and complex process of determining the future of the building, but we remain optimistic.”

Gray said: “We are overwhelmed by the messages of support and offers of help from across the globe in the aftermath of Friday’s fire. There is a huge desire to see Mackintosh’s masterpiece rise again, one which we all share.

“We have incredibly detailed information on the building collated over the last four years, and have worked with teams of talented craftspeople who were doing a tremendous job on the restoration. However, this was one of our first proper looks at the building. As soon as we can we will share information with you.”

The school will reopen on July 2, with the exception of Steven Holl’s Reid Building, directly opposite the Mackintosh Building, and the neighbouring Bourdon Building, which will remain closed for longer. Alternative arrangements are being made to accommodate students who would normally be based there.

David Page, speaking to BD about the library the day after Page/Park won the reconstruction competition in 2015, said: “There’s this immense responsibility because of its world significance that very much says the process we go through will have to be very visible and transparent.

“We expect the drawings to be part of exhibitions of the restoration and any reconstruction. It will be an open process in a way we have never done with a set of drawings before. Drawings generally aren’t made public but stay with the institution.”

The practice made public a detailed, 11-page study of a single bay and post from the balcony in the 1909 Mackintosh library which was described as the “spiritual and intellectual heart” of the art nouveau building. 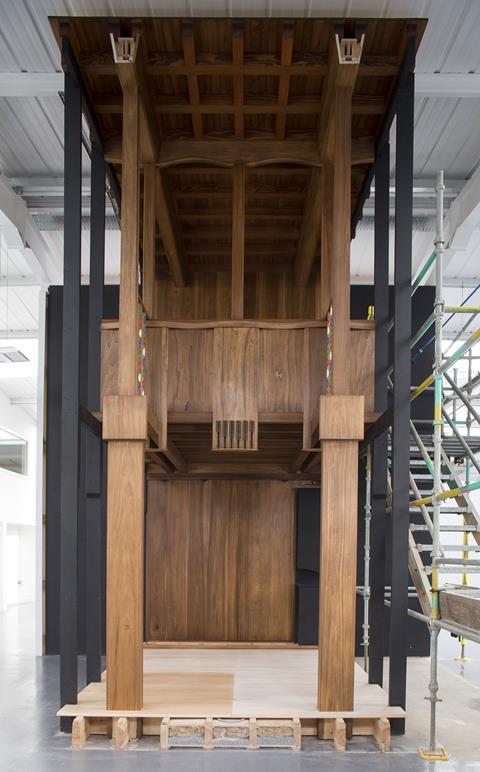 It took the practice three months to prepare the document, with the aid of measured drawings made 20 years ago for a book by Paul Clarke of Ulster University. It was one of the things that won them the competition.

“We didn’t have to do that,” said Page. “We could have built a superficial model but we wanted to examine how the room was put together. How did Mackintosh make one of the great rooms of the world?

“We were staggered by what we found. It was all nailed together, which was completely unexpected. I was entranced.

“You would never have said this angelic space was made by carpenters whacking nails. That was a revelation for us. We realised it was do-able. You can make magic with a hammer, saw and nails. That should be an inspiration to young architects.”

He acknowledged the glass and lights would be more challenging but said the practice relished the challenge.

“We are really chuffed,” he said. “We have had the privilege of working on many of the great buildings in Scotland. The Mac has always been the backbone of our admiration since we were students. We grew up with it.

“The opportunity to take on this incredible symbol of the art school is a responsibility and a remarkable and inspirational opportunity.”