Redesign could delay Stratford Waterfront by a year 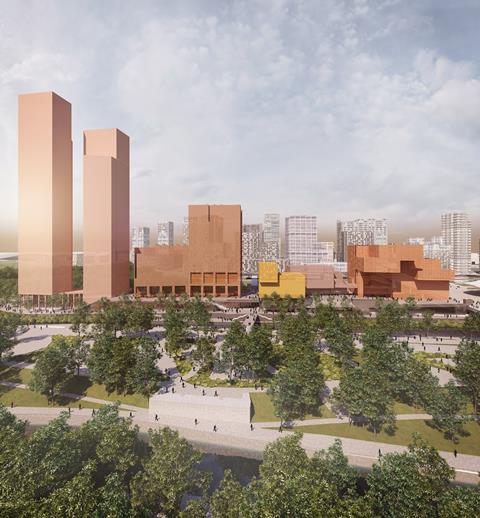 The schedule for the £1.3bn Stratford Waterfront scheme has been pushed back by at least a year by a redesign, BD understands.

A planning application is now expected to be submitted in a year’s time, with completion expected in autumn 2022. Originally an opening date of 2020/21 was targeted.

The architects, led by Allies & Morrison, returned to the drawing board after critics complained the scheme would impinge on protected views of St Paul’s Cathedral – following the row over the damage done by SOM’s under-construction Manhattan Loft Gardens flats.

The revision was also prompted by the V&A’s need to find a new home for its collections currently stored at Blythe House in Olympia which the government is selling.

A public consultation is due to be launched next week, ahead of which everyone is remaining tight-lipped, but the biggest changes will be Allies & Morrison’s two residential towers becoming three much shorter buildings, though they will remain the tallest part of the scheme.

The tallest tower has been lopped from 47 storeys to about 20. The number of flats is also expected to drop slightly from 650, though the final configuration is still being worked on.

A source close to the project said the client, the London Legacy Development Corporation (LLDC), had given over more land to the residential element in the northern part of the site to accommodate three instead of two buildings heading down towards Stratford’s town centre.

The protected view issue is not limited to the towers so the designs of other buildings on the site, formerly known as Olympicopolis, are also being revised.

This includes the V&A East building which is being designed by O’Donnell & Tuomey and will include space for the Smithsonian. As a result the V&A has been working closely with the LLDC to consider its options and come up with a revised brief.

BD understands a decision has not yet been taken on whether this will mean extending the footprint of the museum’s existing plot or adding a second site, possibly at Hawkins Brown’s Here East.

Either way, the museum does not intend to open a carbon copy of the dusty Blythe House depot. Any new storage facility would be open to the public.

A V&A spokesperson said: “We continue to work closely with LLDC as an active partner on the revised masterplan for Stratford Waterfront.

“Our plans for a jointly curated space with the Smithsonian continue to develop, as does our close collaboration with our other partners on the project: Sadler’s Wells, UAL London College of Fashion and UCL.

“Separately, the government’s decision to sell Blythe House has presented the V&A with an extraordinary opportunity: to make more of our world-class collections accessible to the public, and to do so in innovative and engaging ways.

“This has led us to redefine the ambition of the V&A East project; putting our collections at the heart of an expanded brief. This work is ongoing, and we look forward to making announcements when it is complete.”

A major announcement is promised in January.

Others working on the Stratford Waterfront scheme, which will also contain a campus for the University of Arts London and a 550-seat theatre for Sadler’s Wells dance studio, include Arquitecturia Camps Felip and engineers Buro Happold.

This team is also expected to carry out the detailed design work on the project, while the LLDC is expected to go out to market for contractors in summer next year for the entire project, with work hoped to start as soon as possible after planning has been approved.