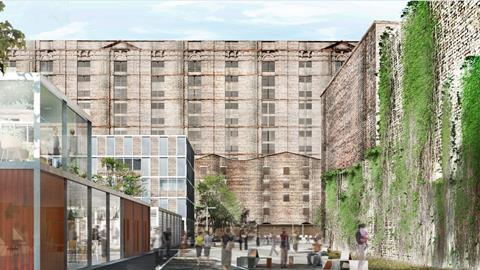 A public consultation on plans to turn a 50ha plot in a deprived part of Liverpool into a new creative district begins this week.

The Ten Streets area comprises former dockland between the northern edge of the city centre and the Tobacco warehouse at Stanley Dock. It sits in the poorest ward in the UK, Kirkdale, but has the potential for up to 100,000sq m of development, according to Liverpool council.

Architect Shed KM and How Planning have been appointed by the council to shape a new “creativity district” in the city. The pair will establish a planning framework and development principles for the area.

Ten Streets is also next door to Peel’s £5.5bn Liverpool Waters scheme, which has been masterplanned by Chapman Taylor, and is less than a mile from Bramley Moore Dock, the proposed new home for Everton Football Club, which is expected to submit a planning application for the site early next year. The stadium is being designed by US practice MEIS with Sheppard Robson.

The consultation begins tomorrow (Tuesday) with the deadline for responses set for November 21.

Part of the Ten Streets site lies within the city’s World Heritage boundary and last week the city set up a taskforce to head off the threat of being dropped from Unesco’s list of cities with world heritage status.

The heritage group gave the city a final warning earlier this year, saying it would be removed from the list of world heritage sites as early as 2018 unless the city reconsidered plans for its historic Docklands area.