Only the chosen few can walk the ‘starchitect’ tightrope

To succeed, an audacious idea needs to be sold with charm and executed with self-confidence, says David Rudlin. And often that is still not enough

The tide of criticism that has greeted MVRDV’s Marble Arch Mound illustrates the perils of iconic architecture.

Many years ago I was fortunate to be part of a team led by Daniel Libeskind working on what turned out to be an unsuccessful competition entry for the Allerton Bywater Millennium Village in Leeds. We spent a few happy weeks in Berlin – this was before they relocated to New York – at the time when the office was preparing for the opening of the city’s Jewish Museum, which is still the most sublime building I have ever experienced.

It made me appreciate the tightrope act involved in being a “starchitect” and how easy it would be to fall off, as Winy Maas has found with the Marble Arch Mound.

I realised at the time that there was some sort of licence you needed to do this stuff – and, no, I don’t know where it is issued.

A few years ago, working on the area round the huge incinerator in Nottingham, we suggested the precedent of BIG’s Amager Bakke incinerator/ski slope in Copenhagen. It would have worked brilliantly, even solving the problem of how to get across the railway. Everyone smiled politely, but it was clear that Urbed just didn’t have the licence to suggest this stuff.

Even with masterplanning – which is what we do – we can be inspired by schemes such as the late Zaha Hadid’s Kartal Masterplan in Istanbul. But we don’t have the licence, or indeed the clients, to do something similar.

Then there is the sheer chutzpah you need to suggest things like a mountain at the end of Oxford Street. It takes a lot of charm and, in Daniel’s case, a beatific smile. 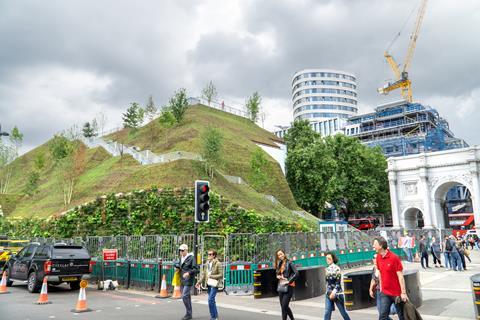 It often involves one of those simple animated sequences that make the idea seem like the most obvious thing in the world. It also includes a series of hyper-realistic CGIs full of happy and contented people, almost like it has already been built and is a great success!

Not long ago I watched a Winy Maas presentation on MVRDV’s Bastide Neil masterplan in Bordeaux. He had me, hook, line and sinker, even though I knew as a masterplanner that the undulating roofline across multiple buildings was completely impractical.

This is the power of the starchitect licence. It means that people believe that an idea is good, not because of any objective assessment, but because it comes from that architect. This happens in other fields, when one of my favourite artists produces a new piece that I’m not sure about, my assumption is that the fault probably lies with me.

The same piece by an unknown painter, musician or writer would be dismissed but, once you have the licence you get the benefit of the doubt, your ideas are good by dint of them being your ideas.

It takes a brave client to tell a starchitect that they don’t like what is being proposed. They are more likely to assume that they are not sufficiently imaginative or open-minded to get it.

Then there is the problem of execution, which is where the Marble Arch Mound stumbled. Many starchitects revel in defying structure, a process aided by CGIs that are not subject to gravity, or wind forces and where the vegetation is always green.

So the temptation is to create extreme shapes and then employ talented engineers to make them stand up and not wobble. Ian Ritchie’s needle in Dublin is an extraordinary object and, when you are there, it feels unreal. But it’s a piece of piss on a CGI.

These buildings have to be perfect if the illusion is to be maintained. On our tour of the Jewish Museum it was explained that the windows had been developed with a car manufacturer so that they would be seamless. If the workings show, bits start to fall off, or the grass dies then the illusion is shattered.

When it goes wrong, or when the trick is tried by an architect who doesn’t have the licence, the results end up in the Carbuncle Cup. The dividing line between iconic and carbuncle is a fine one.

Great art and architecture comes from audacious ideas, sold with charm and executed with self-confidence

None of this is meant as a criticism. Great art and architecture comes from audacious ideas, sold with charm and executed with self-confidence in the face of scepticism and criticism.

At any point the emperor’s new clothes may be exposed as being illusory. But, if it all works, the clothes can turn out to be real and quite splendid!