Canary Wharf Group has unveiled plans for a new residential tower of 55 storeys on a vacant plot in the Isle of Dogs business district.

The Park Place scheme, designed by Skidmore, Owings & Merrill (SOM), will consist of 624 homes for rent managed through Canary Wharf’s rental arm Vertus. The build-to-rent homes will be a mixture of market and affordable rent.

The new tower will be built on a vacant site in the western side of Canary Wharf, facing the middle dock. 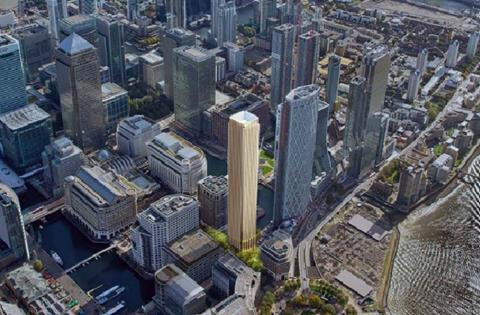 A 2015 planning consent for a commercial-led office building is still live, but Canary Wharf Group now believes that a “mix of residential, cultural, retail, co-working and leisure uses would be of greater benefit to this part of the estate”. It will therefore seek a fresh planning permission to include residential.

The move is part of a longer-term plan by Canary Wharf Group to re-purpose Canary Wharf as a place to live, rather than as a pure business district.

The Wood Wharf scheme, designed by Allies & Morrison, plans to provide more than 3,600 new homes, 25% of which will be affordable, along with a school and a GP surgery.