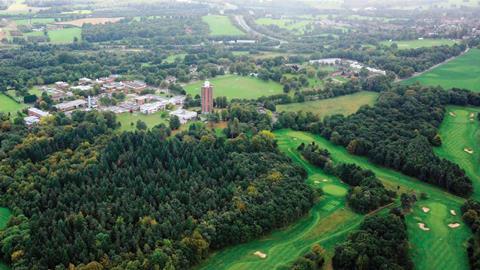 Overview of the Wilton Park site in Buckinghamshire

Robert Adam’s practice has been retained to work up detailed proposals for the first 146 homes earmarked for a former Ministry of Defence site in the Buckinghamshire green belt.

Once home to the MoD’s Defence School of Languages, the 37.5ha Wilton Park site east of Beaconsfield was granted outline consent for 350 new homes, 1,730sq m of new commercial space, a park and a new Air Training Corps facility earlier this year.

Adam Architecture and Urbanism drew up the outline proposals – which include the retention of 46 existing properties for service families – and has now been appointed to draw up detailed proposals for the homes in the first two phases.

Developer Inland Homes confirmed Adam’s ongoing role in the controversial scheme in a statement to the London Stock Exchange this week outlining that the judicial review window for the outline consent to be challenged at the High Court had now passed.

It valued the scheme at £350m and said there were provisional proposals for further development on the site that could provide an additional 250 homes and 18,500 sq m of commercial space.

Robert Adam said the scheme was a “great opportunity” to use the existing character and distinctive history of Wilton Park to make a place of real interest that would be a credit to Beaconsfield.

“Inland Homes’ commitment to the quality of the design will ensure our common vision for the area will go forward into the future,” he said.

Inland said it anticipated submitting reserved matters applications for the scheme early in the new year.