Pilbrow & Partners has been appointed to design the conversion of a grade II listed mansion on one of Britain’s most exclusive streets into a £100m residential scheme.

One Palace Green, in Kensington Palace Gardens, was acquired by luxury residential developer Redd, which is based in London and Monaco. 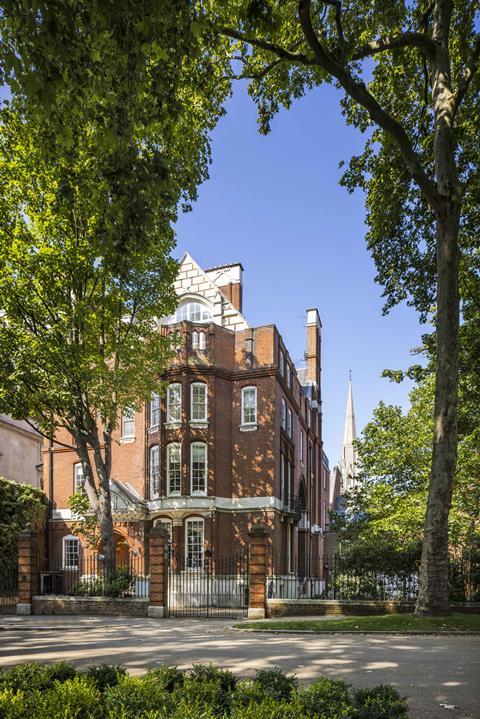 One Palace Green in Kensington, with the spire of St Mary Abbots, Princess Diana’s church, in the distance

It plans to restore the mansion, which dates back to 1870 and was originally the London residence of the Howard family, to create a small number of luxury homes.

Donald Insall Associates is advising on heritage and Gerald Eve on planning.

Kensington Palace Gardens is a private road often described as the “most expensive road” in Britain. Backing on to Kensington Palace, it is lined by embassies including the heavily proteced Israeli embassy, and the homes of billionaires including steel magnate Lakshmi Mittal who bought number 18 from Formula One supremo Bernie Ecclestone.

A planning application is anticipated later this year with construction planned for cummer 2022. Completion is scheduled for 2024.

Redd said it was aiming for a £200m investment programme. It is focusing on projects which have five to 30 units, with each unit valued at between £5m and £30m.

It has an acquisitions pipeline of more than £100m, after acquiring a number of prime residential sites including 82 Mount Street, in Mayfair, which it sold to an investor for £35m in January.

Pilbrow was formed by ex-PLP founding director Fred Pilbrow after the London office of KPF controversially broke away from its US parent firm.

KPF is designing a luxury care home in a former Viictorian theological college a stone’s throw from One Palace Green.