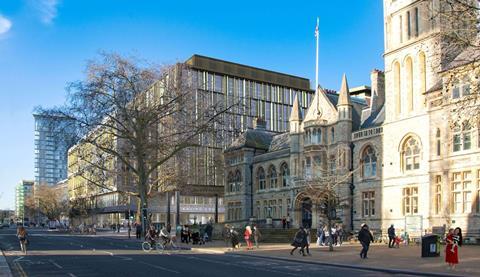 Controversial proposals to redevelop a west London council’s civic centre with a 477-home Patel Taylor scheme that includes a 26-storey block of flats are set to be approved tonight, despite a local MP’s campaign for more design scrutiny.

Rupa Huq, who represents the Ealing Central and Acton constituency in parliament, said the developer was being alllowed to “mark its own homework” because the scheme had not been scrutinised by its brand new design review panel.

The project to replace the existing Perceval House civic centre – which includes new civic centre offices designed by Trehearne Architects – is being jointly developed by Ealing council and Vistry Partnerships.

In an impassioned plea to members of Ealing council’s planning committee last month, Huq criticised the impact of the mixed-use scheme on the Ealing skyline and the quality of consultation that had been conducted on it.

She urged councillors to get the borough’s new design review panel – then two weeks away from being convened – to further scrutinise the scheme.

They’ve been selected as expert architects to oversee all future development. Why don’t we give this to them as the first project to sink their teeth into?

“They’ve been selected as expert architects to oversee all future development. Why don’t we give this to them as the first project to sink their teeth into?” she asked. “They could add safeguards into the process.

“The 1,400 objections could be neutralised with more consultation. People don’t just want two boards outside Tesco’s for two weekends and a website. So let’s take people with us.

“With the future of our town centre we’re only going to get one chance to radically remodel it. So let’s take them with us. Let’s learn from the mistakes of Croydon.” 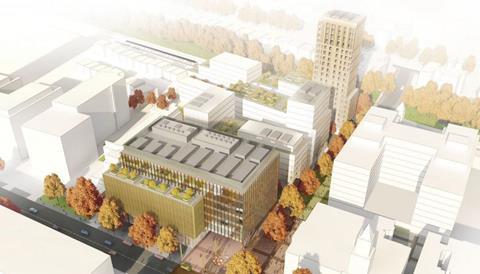 Huq concluded: “We don’t want something that dwarfs our historic town centre. So let’s proceed with the DRP in a state of transparency and accountability with their blessing. Let’s give them more time and let’s get this right.”

The February 17 planning committee meeting was deferred, but only so that councillors could receive “further clarification and reconsideration on the affordable housing mix, including the size of the units, tenure and rental levels”. It was then approved at a virtual meeting earlier this month - only for the decision to be ruled invalid because a technical hitch meant the public could not see what was happening. Tonight’s meeting is set to confirm that decision, unless councillors decide to respond to Huq’s pleas.

Perceval House in Ealing, which is earmarked for demolition

A planning report to the meeting says that since February’s meeting, Vistry has revised the affordable housing mix of the scheme’s six residential blocks to increase the number of three-bedroom units from seven to 28. The move comes at the expense of 21 two-bedroom units, which will be reduced in size to one-bed units.

Council officers are recommending the scheme for approval, subject to the green lights from the mayor of London and the secretary of state for housing, communities and local government.

The report makes no reference to Ealing’s new design review panel, which is run by Frame Projects and chaired by Kathryn Firth, the former head of design for the London Legacy Development Corporation. Other members include Hawkins Brown’s Harbinder Singh Birdi and Sarah Wigglesworth.

It does, however, refer to two 2019 design review panels, which were involved with the scheme at the pre-application stage, although Huq said these were not independent panels.