Plans drawn up by a team of architects including Levitt Bernstein and Morris & Company for 1,600 homes at a site in Poplar, east London, have been sent into Tower Hamlets council.

A joint venture between Malaysian developer EcoWorld London, which is also part owned by Willmott Dixon, and housing association Poplar Harca, is behind the proposal which also features designs by LDA Design and ZCD Architects. 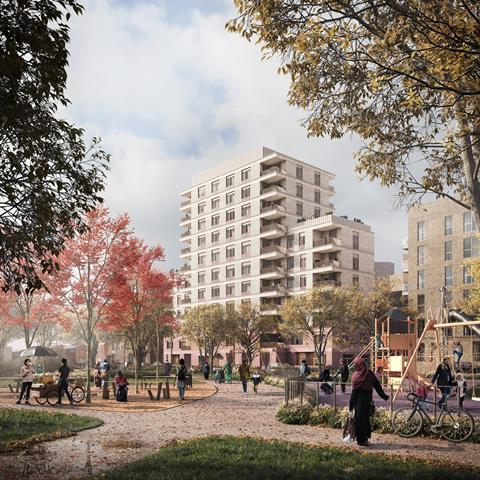 The scheme has already seen 900 homes built across three phases

The masterplan, which is the latest phase of the wider Aberfeldy Village regeneration scheme, includes up to 25,500 sq ft of new retail and nearly 30,000 sq ft of new offices.

It also features a public park and new town square at the end of Poplar’s Aberfeldy Street.

A new walking and cycling route is planned as well which will go underneath the A12 which bisects Poplar and Newham.

The original Aberfeldy Village masterplan was given outline planning in 2012.

Phases 1, 2 and 3a have been completed with phase 3b due for completion within the next year, by which time the scheme will have built 901 homes as well as a public park and community centre.