A young London practice – along with two local firms – has won an international masterplanning competition to regenerate an area of Prague.

Marko & Placemakers with Prague-based architect practices Unit Architekti and A69 – Architekti will design the 24ha regeneration area of Florenc, which is the largest brownfield site close to Prague’s historic city centre. 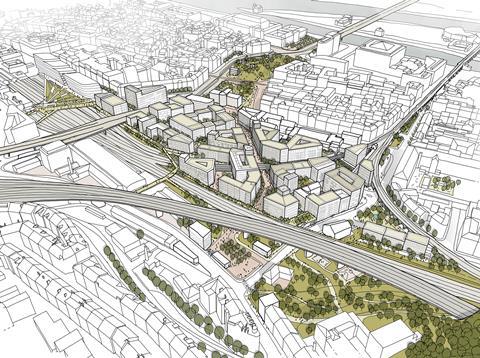 How the masterplan will look

The practice said one of the most challenging tasks of the brief was to resolve the complex transport interchange hub including the bus station, metro station, nearby railway station and public transport links.

Its vision called ‘Orchestrated complexity’ is intended to develop “the area’s unique character and identity through a compact and multifunctional urban framework”.

Green infrastructure and the morphology of the buildings have been designed to maximise climate cooling, the Marko & Placemakers team added.

The Florence 21 competition was launched by the City of Prague, Prague Institute of Planning and Development, Masaryk Station Development and ČSAD Praha Holding. It attracted 57 entries from all over the world.