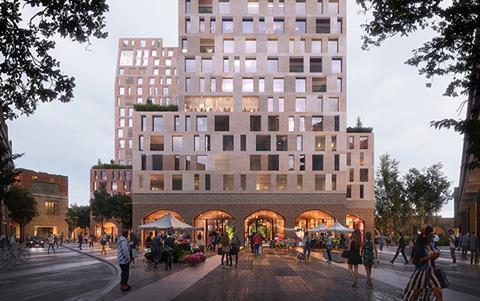 London mayor Sadiq Khan will now decide whether to give a £500m build-to-rent scheme in south London the green light after the local council refused it planning.

Southwark council said KPF’s plans for a former biscuit factory site in Bermondsey did not have enough affordable housing when it threw out the plans in February.

At the time, a council report said couples would have to be earning £30,000 a year to be able to move in - £10,000 more than the equivalent the lowest-income households in the borough were paying in rent.

But explaining his decision to call it in, Khan said “the nature and scale” of the plans meant the scheme could have a "significant impact" on the implementation of the London Plan in terms of housing supply.

Grosvenor executive director Simon Harding-Roots said: “[We] have spent over five years working with the community and others to ensure our proposals reflect their ambitions for the area.”

The proposals for the scheme, called the Old Biscuit Factory, also include a new school and new retail, community and dining spaces.

Khan is expected to give a decision later this year.