Glenn Howells Architects has unveiled plans for a 1,300-home build-to-rent development in Birmingham.

Housebuilder Dandara Living has opened a pre-planning consultation on the proposals.

The Warners Field scheme will include around 1,300 rental homes, built and managed by Dandara, in buildings ranging in size from six to 29 storeys.

The project would be the first phase in a proposed new neighbourhood that Dandara hopes will form a major part of Birmingham council’s vision for the Rea Valley Urban Quarter in the centre of the city. 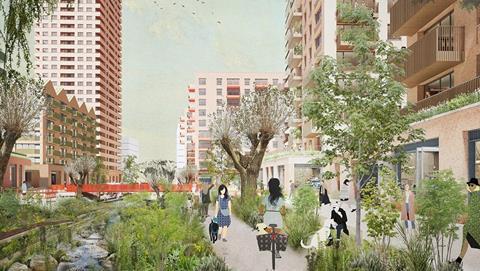 The plans also include retail and leisure facilities around the River Rea, while 50% of the site will be devoted to green and pedestrian spaces.

Dandara plans to submit three planning applications related to the project by the end of the year.

Glenn Howells said: “This hugely exciting project, which is on our doorstep here in Digbeth, has the opportunity to create a new quarter for Birmingham that reveals and celebrates the river that was such an important part of the city’s history but until now has been hidden.”

Dandara revealed last month that it has set up a new division in the east of England to deliver 500 homes a year as it seeks to become a national housebuilder.