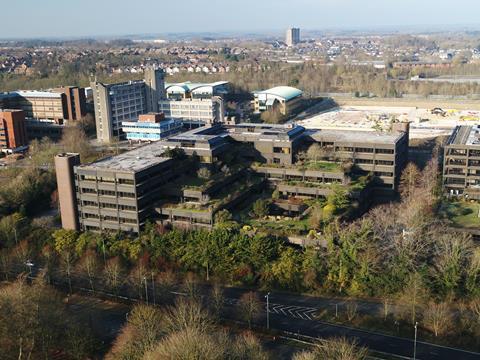 Feilden Clegg Bradley has been appointed to carry out the full-scale refurbishment of Basingstoke’s Mountbatten House, a grade II office building designed by Arup Associates.

The Basingstoke complex, which was formerly known as Gateway House, was developed between 1974 and 1976 for the paper manufacturer and merchant Wiggins Teape as its UK headquarters. It was designed by Arup’s Group 2 led by Peter Foggo.

The five-storey, 154,200sq ft building was listed in 2015. It has become known locally as the Hanging Gardens of Basingstoke thanks to its series of roof gardens designed by the landscape garden designer, James Russell.

Squarestone Growth appointed Feilden Clegg Bradley to undertake the extensive restoration project following the practice’s recent work on other listed buildings such as the Queen Elizabeth Hall, Purcell Room and Hayward Gallery at the Southbank Centre in London.