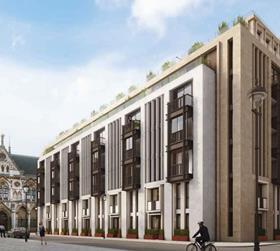 An improved performance at its UK business helped listed architect Aukett Swanke narrow losses in the half year.

Aukett said it had reduced costs at the UK operation by £352,000 while more work at its executive architecture business Veretec also helped with the firm working on a number of schemes including a £135m residential project (pictured) being built by Multiplex for upmarket developer Lodha on Carey Street in London’s Holborn district.

The Middle East remains a problem area with losses widening £58,000 to £438,000 which the firm said was down to project delays.

But earlier this week Aukett said there was a sign of a turnaround with the firm finally getting the green light to start on exhibition centre in Dubai – more than 18 months after winning it.