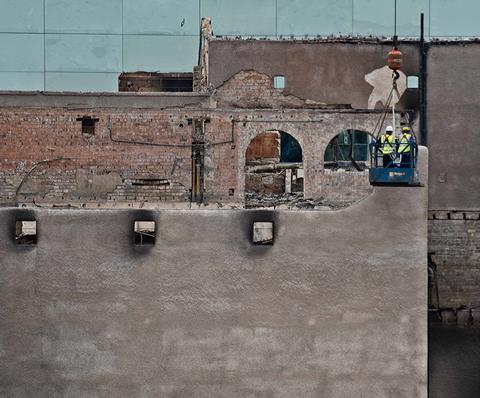 Work on the managed dismantling of The Mackintosh Building, Glasgow School of Art, after the second fire

Residents and business owners barred from returning to their properties after the June fire at the Glasgow School of Art are considering legal action against Kier, Glasgow City Council and the art school itself.

A safety cordon prevents access to 33 homes and 55 businesses. It was erected following the June 15 blaze which gutted the grade A-listed Mackintosh building for the second time. Behind the cordon demolition contractor Reigart is undertaking dismantling work to prevent the collapse of parts of the building and to try and preserve the surviving fabric.

Govan Law Centre, a local not-for-profit legal practice, said it had held a meeting with representatives of Sauchiehall Street Inner Cordon Businesses and is looking into a public interest litigation.

In a statement, it said: “While Glasgow School of Art and Kier Construction are ultimately responsible for the fire, Glasgow City Council are responsible for risk assessment, the cordon and building control management.”

It added: “Glasgow City Council senior officers, Glasgow School of Art and privileged elites appear more interested in saving the Mackintosh building than saving the community of Sauchiehall Street and Garnethill, which have been around a lot longer and are a special part of our city’s heritage.”

According to the centre, locals have been unable to enter their homes for over nine weeks, including even to collect passports, medicines, car keys or clothes.

Mike Dailly, solicitor advocate at Govan Law Centre, said: “55 Sauchiehall Street businesses – with 350 jobs – are under serious threat of going bust. Ordinary residents and local businesses are suffering and have lost a lot of money.”

At the time of the fire Kier had been working on a £25m contract to restore the building, following the previous fire in 2014. The restoration work, led by Page/Park Architects, was due to be completed in January 2019, however the contract was terminated by mutual agreement after the fire.

The director of the Glasgow School of Art, Tom Inns, said: “We agree that enabling the community to return to their homes and businesses as soon as possible is the priority, which is why we are working seven days a week to make the Mackintosh Building safe and stable.

“The shoring scaffolding on the east gable, which is critical to the stabilisation, is due for completion in the next few days,” he added.

“The Glasgow School of Art is very much part of Glasgow and the Garnethill community. We stand ready to help as much as we can when the security cordon is reduced and residents and businesses are able to return to their homes and premises, and like all those affected we are keen this happens as soon as practically possible.”

A Glasgow council spokesman said it hoped to reduce the cordon to allow a “substantial number” of people to return on Saturday, adding: “The council has acted under section 29 of the Building (Scotland) Act 2003 in order to protect life. Our priority remains getting residents and businesses back to their properties safely.”